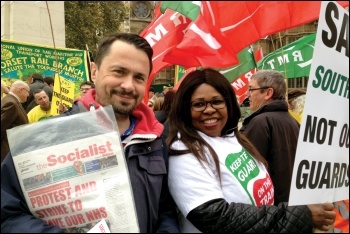 As part of the drive to nationally sell 1,000 extra issues of the 1,000th edition of the Socialist (21-27 June), Leicester East Socialist Party branch aims to sell an extra 30 papers that week.

In preparation for achieving the target we will focus in June on the importance of selling, subscribing to, reading and writing for the Socialist.

We've planned a Saturday stall workshop, along with Leicester West branch, to discuss our methods of engaging with the public, raising donations and politically selling the paper. We'll follow this with a stall in the city centre to put these ideas into practice.

There will be a week of action, with extra stalls and paper sales throughout the week of the 21st with activities at the hospital, jobcentre, train station and our local Tesco. On Saturday 23rd we'll divide our forces and have two stalls instead of one, extending them by one hour.

Our 19 June branch meeting is: "Do revolutionaries still need a paper?", when we'll be discussing the role of the paper and its continued relevance in an age of social media.

This strategy and focus should arm us with the tools we need - practical and political - to play our part in achieving the overall target for this milestone edition of the Socialist.