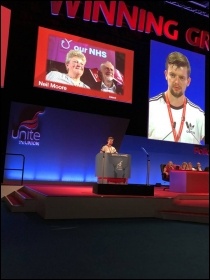 Socialist Party members have had a big impact during the first two days of Unite the Union's policy conference in Brighton.

At the last policy conference in 2016, Unite met in the aftermath of the Brexit vote and in the middle of the attempted Blairite coup against Jeremy Corbyn in the Labour Party. These issues are still a big factor.

The executive committee statement on the European Union was passed and rightly defeated motions explicitly calling for a second referendum. This superseded a motion moved by Socialist Party member Kevin Parslow from LE/1228 branch which called for a socialist Brexit in the interests of workers.

Kevin, who two years ago moved the successful motion calling for mandatory reselection of MPs in Labour, this time also moved an amendment by LE/1228 branch, to the motion on renationalisation. Unite policy is now to call for no compensation for fat cats but only given on the basis of proven need, which is a big step forward in Unite's policy on public ownership. In this debate London bus worker Joanne Harris moved a resolution calling for public ownership of buses.

On 2 July conference passed a motion on the Football Lads Alliance, the rise of the far-right and the 'free Tommy Robinson' campaign. A composite motion was passed which included an emergency motion put forward by Socialist Party members in LE/1228 branch calling on Unite and other unions to place themselves at the centre of organising against the far-right and to use the authority of the trade unions to mobilise and challenge far-right ideology.

Speaking in the debate Neil Moore from Northern Ireland made the point that, while it's correct to work with anti-racist campaigns, it is trade unions which must give the lead.

As we got to press Unite conference also passed a motion to support the Refugee Rights campaign and encourage branches to affiliate.