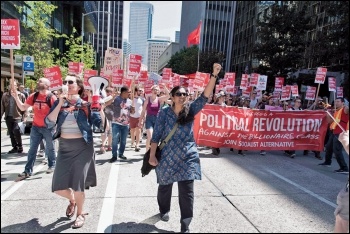 In the US, the biggest capitalist economy in the world, 40 million people - one-third of them children - live in poverty. One person in eight depends on food stamps. Over half of Americans want to see taxes on the rich raised.

But last December Trump cut corporate taxes by $1.5tn. This is a further attack on the US's threadbare public services, already cut to the bone.

KSHAMA SAWANT, who writes here, is a member of Socialist Alternative, the Socialist Party's co-thinkers in the US and an elected councilmember in Seattle, the only non-Democrat in the council. She was a leader of the recent campaign for a city tax on big business to start to address the housing crisis.

The betrayal of this campaign by the Democrats exposed their inability to offer any alternative to Trump.

Right-wing Democrats in the council acted as the spokespeople for big business. But left Democrats, who had supported the tax but are not prepared to challenge the capitalist system, also betrayed the workers and homeless in the city by capitulating to Amazon's threats rather than preparing to mobilise mass opposition.

Seattle now has the third worst homelessness crisis in the nation. 53 people have died on the streets this year, while the number of homeless public [state] school students rose 22% in a year. Seattle is also home to the world's richest billionaire, Amazon boss Jeff Bezos.

On 14 May, Seattle City Council passed a historic tax on Amazon and other big corporations to fund permanently-affordable, publicly-owned housing, under the leadership of Socialist Alternative along with the Democratic Socialists of America and others.

The $48 million annual tax on the biggest 3% of corporations in Seattle was the end result of a powerful campaign by housing activists and socialists over nine months.

Although substantially reduced under big business pressure and Amazon's threat to take away jobs (with right-wing Democrat councilmembers representing them in the council chamber), this was a major victory and inspiring example for workers around the country.

Seattle's housing crisis has been decades in the making, presided over by a Democratic establishment which has worked hand-in-glove with big developers.

But their market-led model will never work, because developers build to maximise profits, which means high-end units, not affordable housing.

Our movement calls for the building of permanently affordable, publicly owned housing, not only to address homelessness, but as a step toward a massive expansion of social housing to begin to provide working people with a real alternative to the broken private housing market.

Washington has the most regressive tax system in the country, which also results from years of Democratic Party capitulation to big business and Republican leaders.

Our movement's victory on the Amazon Tax stood out as a shining counterexample to decades of corporate tax cuts and attacks on public services, which is no small part of why it received such enormous national (and also international) attention, including the support of Senator Bernie Sanders.

Some Democrat city councilmembers explained their reasons for capitulating on the Amazon Tax as regrettable but necessary because the so-called 'No Tax on Jobs' campaign had "unlimited resources" and that defending the tax was "not a winnable battle at this time." But who said this fight was going to be easy?

It was predictable that big business would launch a referendum effort to overturn the tax - they also attempted this during the $15 minimum wage struggle.

Some left Democrat councilmembers and community leaders seemed to believe opposition could be neutralised by making drastic concessions - like cutting the original demand of $150 million by half - rather than defeating big business by building a fighting movement.

Socialist Alternative was already preparing the launch of a massive defence campaign to defeat the referendum, and was in active discussions with other groups to do just that.

We have no guarantees that if we fight we will win in any given instance. But the most discouraging and damaging thing of all is to accept defeat without even putting up a fight.

In the struggle for any serious reform, we should plan for determined big business opposition and setbacks along the way, because the interests of working people and the billionaire class are fundamentally at odds under capitalism.

Which is why I'm a socialist. Rather than giving in to corporate extortion, we should take big corporations like Amazon into democratic public ownership and workers should run them instead.

Was the referendum fight unwinnable? We warned that Amazon and big business would fight us. This tax might be miniscule in the scheme of corporate profits but it is the fear of what it could unleash if successful - a mass movement of working class people gaining confidence to fight for more spreading across the nation as the fight for $15 has - that motivates them.

Millions of workers around the country had already been inspired by our example, and efforts were springing up elsewhere.

In spite of the repeal, the Google Tax being discussed in Silicon Valley is still going ahead onto the ballot this November.

We need to recognise that this capitulation by the Democrats has given encouragement to big business as well as the right populist groups that have sprung up recently in Seattle.

One consultant to the dishonest and anti-poor No Tax on Jobs confirmed this perspective when he told The Atlantic: "What do we want? A new city council."

Next year will see the most polarised Seattle City Council election in many years, whether we like it or not, but we should be clear that we can't back down from this fight either.

The result of capitulation by working people and the left is not peace, but further growth of the right and corporate politics.

The Democrats' capitulation makes things clearer than ever: standing up to big business will require building a political alternative.

The progressive and socialist groups who have led Seattle's housing justice movement should unite for the 2019 elections to run independent left candidates against the four corporate-backed Seattle City Councilmembers who led the council opposition to the tax.

At the same time, the disappointing spectacle of left Democrats also bowing to Amazon's pressure shows that, to hold candidates accountable, we need to organise a new left alliance, completely independent of corporate cash and the Democratic Party, which has again failed to be a reliable voice for working people.

Fundamentally we will need to be ready to challenge big business by building a mass movement around a socialist programme.

The Amazon Tax was the opposite of a tax on jobs or working people. Socialist Alternative called for a tax exclusively on big business and argued against taxing small businesses.

The Amazon Tax would have created hundreds or thousands of jobs, injecting $50 million annually into construction and social services, with many other jobs being created in the economic ripple effects.

Would big business have cut wages or jobs to make workers pay for the modest Amazon Tax? First of all this tax was a drop in the ocean to Amazon, Starbucks and the rest, and they'd already saved far more money through Trump's corporate tax cuts last year than the tax would have cost them.

Also, Amazon is here because there is a large pool of highly skilled workers in Seattle, which they have used to their advantage to become the second wealthiest corporation in the world.

They'll move jobs if and when it suits their bottom line, independent of modest taxes like this one.

But we should be clear that any given threat could be carried through by big business under capitalism.

Amazon could have halted its tower construction and taken those 7,000 jobs away, even though it would have cost them a huge sum of money, in order to make an example of Seattle.

Of course, in the end they resumed construction - most such threats are empty threats.

The Boeing example shows that capitulation is no solution. When Boeing threatened to take jobs to other states we called for nationalisation of the factory under democratic workers' control and management.

I said: "The only response we can have if Boeing executives do not agree to keep the plant here is for the machinists to say the machines are here, the workers are here, we will do the job, we don't need the executives.

"The executives don't do the work, the machinists do... We can re-tool the machines to produce mass transit like buses, instead of destructive, you know, war machines."

Instead two of the biggest corporate handouts in US history were given by Washington State to Boeing executives, but they've moved the jobs anyway. That's why it is a losing strategy to capitulate to corporate bullying.

An enormous amount of confusion about the Amazon Tax was spread in the corporate media. Among the many outright lies, signature gatherers said the tax was on employees not employers.

Their campaign succeeded in creating temporary confusion, as shown by a 13 May poll, with 54% of people surveyed opposing the tax.

But there is broad general support for taxing big business and the rich in the US. Is Seattle somehow less progressive than the rest of the country on this issue? I don't think so.

What we've seen is a mass corporate misinformation campaign, which needed to be answered at the doors and on the streets by a grassroots movement.

We must use the coming months to prepare the launch of a broad progressive alliance to fight for affordable housing and replace the pro-capitalist politicians in Seattle City Hall.

We're not conceding anything on the Amazon Tax - we continue to demand the promised 'Plan B' for affordable housing and homelessness services.

In this fall's Seattle budget, we'll be campaigning not only for a big business tax but also more broadly for a genuine 'People's Budget.' The fight starts now.