After quitting the cabinet, Boris Johnson is still living rent-free in a £20 million official residence.

The Foreign Office pays six-figure rent to the queen for Johnson's squat - £482,341 in 2015, says the Mirror. At the same time, he is collecting "rental income of more than £10,000 a year" from a £2.3 million house he owns, according to parliament's register of interests.

The millionaire Tory gets big money from the Telegraph for columns - £250,000 a year while he was mayor of London. He'll also get £17,000 compensation for resigning, on top of his £77,379 MP's salary - before pension and expenses. 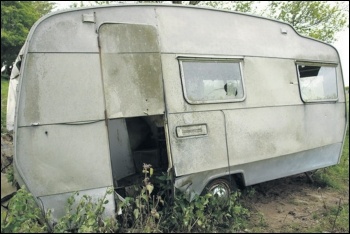 Workers are even forced to shelter in caravans, photo by Brown/Geograph/CC   (Click to enlarge)

Shop workers, builders, engineers and chefs are among those holding down jobs while having no home to show for it. In expensive cities like Bristol, workers even bed down in caravans, horse boxes, railway arches and disused public toilets.

Of course, with leeching buy-to-let landlords like Kent's Fergus Wilson running the show, it's no surprise. Not content with barring "coloured" tenants from his homes for leaving a "curry smell," the bigot has just evicted four single mothers.

His reason? The council only lets him leave new mums without hot water for four days at a time. Rather than forking out for proper boiler maintenance, Wilson kicked out his rent-payers.

The Socialist says: kick out Wilson and the big landlords! For compulsory registration of private landlords, caps on rents, and a mass council house building programme!

£7m for dinner with May v school breakfast queues

The Tories made £7.4 million from selling access to the prime minister in the last year. 81 business owners paid tens of thousands a head for dinner, lunch or drinks with May, according to the Conservative Party.

Meanwhile, in Cardiff, around 130 parents queued from before dawn to get their kids into a school's free breakfast programme. Parents who can't afford the food - or pre-class morning childcare while they work - started queueing from 3am, says the Guardian.