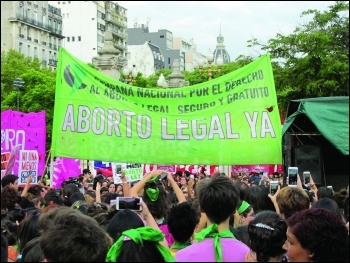 On 8 August, Argentina's Senate voted by 38 to 31 against legalising abortion during the first 14 weeks of pregnancy. In June, the House of Representatives voted narrowly in favour of it. Currently, abortion is allowed in Argentina only in cases of rape, or if the mother's life is in danger. Despite this setback a huge abortion rights movement is developing throughout Latin America.

Maria Clara Ferreira from LSR (Liberdade, Socialismo e Revolução - CWI Brazil), was part of a solidarity delegation on 8 August from the broad left party Psol in Brazil. She reports on Argentina's pro-choice movement.

In the morning, there were already thousands of people, organised in groups, collectives and political parties, singing songs, chanting, hoisting flags and wearing green pañuelos (handkerchiefs).

In spite of the expectation that the senators would vote down the bill, the movement put people on the streets in order to put pressure on the senate to vote yes.

The eyes of the world were turned to Argentina, and society was polarised over the subject. In the square in front of the Senate, two major blocs were organised.

The conservative side, supported by right-wing factions and the Vatican, was able to put many on the street sporting blue pañuelos, symbolising opposition to the legalisation. Even the establishment media, though, had to recognise the protest of green pañuelos was much bigger.

Walking around the streets of Buenos Aires, one could see young girls and older women, students from schools and universities, people from the suburbs and from downtown, all with the same understanding that fighting to legalise abortion is defending women's lives. In Argentina, around 500,000 backstreet abortions are performed every year.

The demonstration ranged from the most militant left to moderate progressive organisations. It is also significant the high number of men supporting the cause and taking part in campaign actions, reinforcing the importance of unifying the working class behind these struggles.

The result of the senate vote only strengthened the sentiment that this system has failed and does not represent us. On the week of the first vote, in June, polls showed that 55% of Argentinians were in favour of legalising abortion.

Media headlines the next morning prominently featured former president Cristina Kirchner's favourable position on the topic. But they also highlighted that her administration and her party had previously rejected the bill multiple times. This serves to show how fearful this political faction has become to confront this new generation, now spearheading the movement.

People going to work kept their green pañuelos attached to their suitcases, around their arms, or around their necks, clearly stating that the struggle will go on until it is law.

The news also exposed the strong investment made by the Vatican to pressure senators into voting against the bill. While the movement chanted on the streets: "Iglesia. Estado. Asunto separado!" ("Church. State. Separate matters!"), the CAEL movement (Argentinian coalition for a secular state) organised a stall to collect signatures for an end to state subsidies for churches based on their number of baptisms - which amounts to 20 million pesos (£830,000) a year.

A new legalisation bill can't be debated again by the House of Representatives for a year. But in October, a new conference of the National Women's Gathering will take place, and will produce papers pointing to the next steps for the movement.

It promises new actions to take the streets and denounce all politicians who voted no in the upcoming 2019 elections.

As this article is being written, there are demonstrations happening in Buenos Aires protesting over the deaths of more women due to illegal, backstreet abortions. This proves, once more, that the fight against oppression will not leave the streets.

Women are at the forefront of many struggles around the world, not least because we suffer more intensely the inequalities of capitalism.

It is up to the revolutionary left to give answers to the anti-capitalist sentiment present in these movements and show the need for a socialist society that can offer women real choice over when and whether to have children.