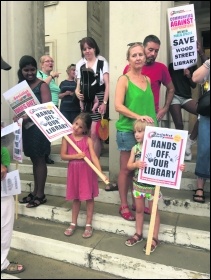 Libraries come from a tradition of workers' self-education. Their heyday was the 1950s when workers laboured in the factories and mines and libraries serviced a certain deprivation of the 'soul'.

The achievements of the workers' movements after World War Two included the 1964 Public Libraries and Museums Act - making provision statutory. It is a testament to the post-war settlement that 'going to the library' is lodged into millions of working class children's memories.

Of course reading habits and print media have undergone their own revolutions, but libraries - historically and today - play a far greater role in working class communities than reading alone.

In 2016 Wood Street library - along with two other libraries in Waltham Forest, east London - was earmarked for closure and 'relocation' to sterile plastic retail units in newly 'regenerated' housing developments. All three libraries saw community campaigns immediately spring up to prevent these relocations and building closures.

The Labour councillors, including one who had previously espoused her "love for Corbyn" at a meeting of Momentum in 2016, voted to close our library. In this topsy-turvy world of local government cuts, Tory councillors got cheers while Labour ones were heckled.

The decision taken at the cabinet was to agree in principle the closure of 1950s building and the library's relocation in a year's time.

The campaign has agreed to fight on. A year is a long time in politics and we're all agreed... it ain't over.