Link to this page: https://www.socialistparty.org.uk/articles/27885

A towering figure in the labour movement 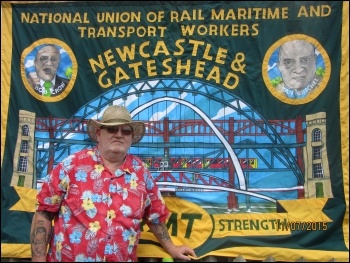 Stan Herschel in 2015 at the Durham Miners' Gala. Newcastle & Gateshead RMT branch had the banner made with his & Bob Crow's pictures on. Photo by Elaine Brunskill   (Click to enlarge)

Socialist Party members in the Northern region were saddened to hear that our comrade and friend Stan Herschel has passed away.

Many knew Stan for his humorous and insightful comments on social media. However, first and foremost we will remember Stan as a class fighter of the highest order.

Prior to his early retirement due to ill health Stan was the RMT union's regional organiser. Comrades have spoken of the wealth of experience he had as a militant trade union organiser - including his role in a determined strike of deep sea divers, who won a massive pay increase of around 50%.

Stan was always eager to assist workers in struggle. This included invaluable advice given at National Shop Steward Network meetings to strikers from the Tyneside Safety Glass (TSG) dispute.

Strikers were so impressed by his advice that they asked for his speaking notes - which offered systematic advice on how to take on the bosses. TSG Unite members also send their condolences.

Stan was an enthusiastic proponent of sharing his knowledge with the next generation. This included speaking to students at Northumbria university.

Stan joined the Socialist Party around a decade ago during the battle to stop the privatisation of the Tyne and Wear metro system. While other trade union leaders in the region paid lip service to the campaign, Stan, with the backing of Bob Crow and the RMT nationally, was at the forefront of this battle.

Socialist Party members were extremely impressed by Stan and he was clearly impressed by us. Even after his retirement we used to meet up with Stan for coffees. He always had his finger on the pulse of what was happening within the RMT and the wider labour movement. Also, he was always prepared to listen - an invaluable skill.

Alongside being a towering figure in the labour and trade union movement, Stan was devoted to his family. He often spoke of his wife Pat, his mam, his son and daughter Stan and Liz, and his grandchildren. We send them all our condolences.

Some may say that Stan's form of militant trade unionism is from a bygone era; we think this is the music of the future. And what a legacy he leaves!

This version of this article was first posted on the Socialist Party website on 4 September 2018 and may vary slightly from the version subsequently printed in The Socialist.