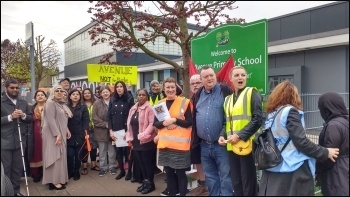 'Isolation booths' - solitary confinement in all but name - are an increasingly common feature of 'zero-tolerance' school behaviour policies.

As the new school year begins, there is, as always, a flurry of articles detailing parents' and school students' opposition to uniform and behaviour policies at schools around the country.

One privately run 'academy' school in Stoke reportedly took dozens of students out of class for not having the correct purple trim on their trousers. And the Outwood Grange Academies Trust has released statistics on exclusions, with one of its schools in Middlesbrough suspending a staggering 41% of its students.

Many of the schools with draconian behavioural policies justify them on the basis that they are part of 'raising standards'.

It is true that for any school to function successfully there need to be clear and consistent systems in place. Students themselves often comment that they like to 'know where they stand' in terms of their behaviour and possible consequences.

However, the trend towards 'zero tolerance' is a worrying one that needs addressing to stop harm to individuals and communities.

Exclusion policies - isolation, suspension and expulsion - often prevent students learning the nuances of interaction with others. At best they are quick fixes which store up more problems in the long term.

And schools chasing league table positions sometimes use exclusions to artificially boost results by getting rid of students who may not perform well in exams.

These developments must be seen in the light of the massive cuts to state education. In the past, young people with complex needs would receive extra support to manage their behaviour and talk through their problems.

But social inclusion and special educational needs departments have been devastated by austerity and privatisation. Now exclusions are the preferred 'strategy' instead.

We need to fight for a genuinely inclusive education system, publicly owned and fully funded to meet the needs of all young people in education. School students, staff and parents must have proper democratic input into developing policies and systems based on mutual respect and genuine support - not quarantine.