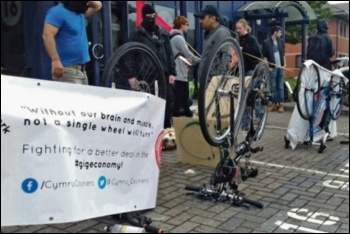 Protesters gathered outside the company's Cardiff office on the appropriately named Vanguard Way to boycott the latest meeting managers had organised under pressure from their angry workforce. To date, no progress has been made on the demands of the riders, who have vowed to step up their campaign.

The 3 September action followed a spontaneous strike first called by Romanian riders who work for Uber Eats. The call was taken up by other riders and all refused to work as a warning shot to the company. Two of the biggest McDonald's restaurants in the city were forced to turn off the Uber app because delivery orders couldn't be filled.

Riders have been pressing the company for months to do something about a long list of grievances including long waits between jobs - up to 45 minutes over the summer - a disregard for couriers' safety, and a lack of 'boost' - a multiplier that increases the amount couriers get paid per mile.

Many riders are getting far below minimum wage at present and can hang around all day and receive only a few orders. The company uses modern technology to force workers into Victorian working conditions.

Many had reports of other riders who had been dropped by the company for standing up to them or joining a union. But they've lost their fear. They said more couriers had turned up to the boycott protest than ever attended any of management's sham meetings.

The company is trying and failing to conceal its nervousness. At the recent protest it denied the riders' union rep from the IWW union access to the meeting for fully half an hour with riders chanting "same old Uber - always waiting" until they let him speak to senior managers, who offered no concessions.

Riders played the app sound over the megaphone to cheers, showing how many calls for delivery were going unanswered.

While denying access to the workers' union rep, management called the police to try and get the protest outside dispersed. Armed officers in three vans appeared but protesters refused to be intimidated.

The company has said that the slackening demand is due to the summer period, when lots of students have returned home. But riders have the same bills to pay no matter what time of year it is.

The company should pay a retainer in periods where demand slackens and a much higher rate per mile, with a guarantee that workers earn no less than a minimum wage of £10 an hour.

The riders' campaign has already been met with huge sympathy in the trade union movement and the wider working class. With strike action at both McDonald's and TGI Friday's, the potential exists to link up the disputes of service-sector workers into a powerful movement that could force considerable concessions from the bosses.