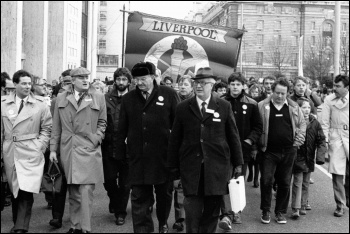 Some of Liverpool's Militant-led socialist Labour councillors, including Tony Mulheran (second from left in flat cap)   (Click to enlarge)

"Open to both conference delegates and the public, the festival will host hundreds of speakers, musicians and artists."

With this glittering intro, and with the venue being in Liverpool, we assumed our request for inclusion at Momentum's The World Transformed (TWT) fringe event at Labour Party conference would be a shoo-in.

We wrote to TWT suggesting the participation of the 'Liverpool 47' - the councillors who defied Thatcher in the 1980s, refusing to pass on cuts and making big advances for working class people in the city. We offered a comprehensive outline of the struggle, including display boards, videos and recorded interviews.

This was initially greeted with enthusiasm by the Liverpool TWT liaison officer who wrote that it was exactly what TWT was formed to showcase and who confirmed that she would recommend its inclusion to the national body.

However, we learned that bureaucratic Momentum leadership who control TWT had other ideas. The response was - sorry, no can do.

So, a period in the Liverpool class struggle recognised nationally and internationally as a seismic historical event in which 47 democratically elected councillors were removed from office for carrying out their electoral promises, is not important enough for TWT to include in its programme. I think labour movement activists will draw their own conclusions.