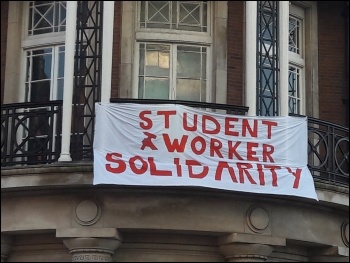 A mass movement against attacks on education could mobilise into action the thousands of students inspired by Jeremy Corbyn's anti-austerity programme, alongside striking university staff.

Unison public sector union members in higher education are currently balloting for strike action against the latest in several years of below-inflation pay increases. They are joined bymembers of the University and College Union (UCU). Earlier this year UCU held an inspirational strike over cuts to lecturers' pensions.

Pay for uni staff has declined by 21% in real terms since 2009. If both unions strike, there is the possibility of even more significant action this autumn than in the first half of the year, when lecturers were on strike at 61 different universities across the country.

After the tremendous solidarity shown for their lecturers throughout the last academic year, students must work to support the campaign for a 'yes' vote among university staff.

The ballots must meet the 50% turnout threshold imposed by the Tories' draconian anti-trade union laws. But with a concerted effort this boundary can be smashed.

The Tories have been responsible for the destruction of higher education, but their government is caught in a deep crisis. A Corbyn government, if it adopted socialist policies, could provide the alternative many are now looking for. Socialist Students calls for a united struggle of both students and workers against the cuts and to kick out this rotten Tory government.