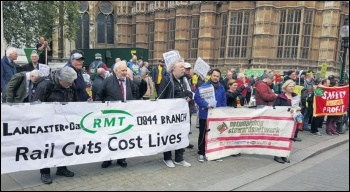 If you take a cursory glance at the news these days, you will see problems on the railways - strikes, delays, timetable meltdown and so on.

The role has different titles - guard, conductor, train manager, onboard supervisor and more. This has led to misunderstanding of what that role is for and why it is there in the first place.

For me, the guards' role has always been the face of the railway system, whether for a regular commuter, a kid off to school or a tourist out for the day in the country. Passengers have the opportunity and the security of seeing a face, a human representative of this Victorian institution.

Drivers don't want to be abandoned to deal with an array of situations that they may have no experience in or training to deal with. Train drivers' union Aslef calls for "no extension of DOO schemes or introduction of DOO in the form of 'DCO' or any other name."

I have never spoken to a train crew manager who advocated DOO or could explain why it would be a good idea to take guards away. If a guard is non-essential, how essential can a manager's job be?

What could they expect to gain from losing a safety-critical trained member of staff? They would lose the route knowledge and experience of someone who, on average, has worked there for 12 years. Don't even bother hoping for a helping hand with your suitcase, pram or wheelchair.

The prices would stay the same, or in this privatising, profiteering culture, I wouldn't be surprised if they went up.

The Conservative government wants to attack the strength of unions. It placed in the private tendering process for railway franchises a desire to remove and downgrade the rights and responsibilities of the safety-critical person on board. The government mentions that staff should be visible. But a driver sitting in a front train cab as they go past you on the platform may be 'visible'!

The government has the aim of giving over more of the public's money and putting it straight into those millionaires' pockets. All the while services decline, prices soar and jobs are lost.