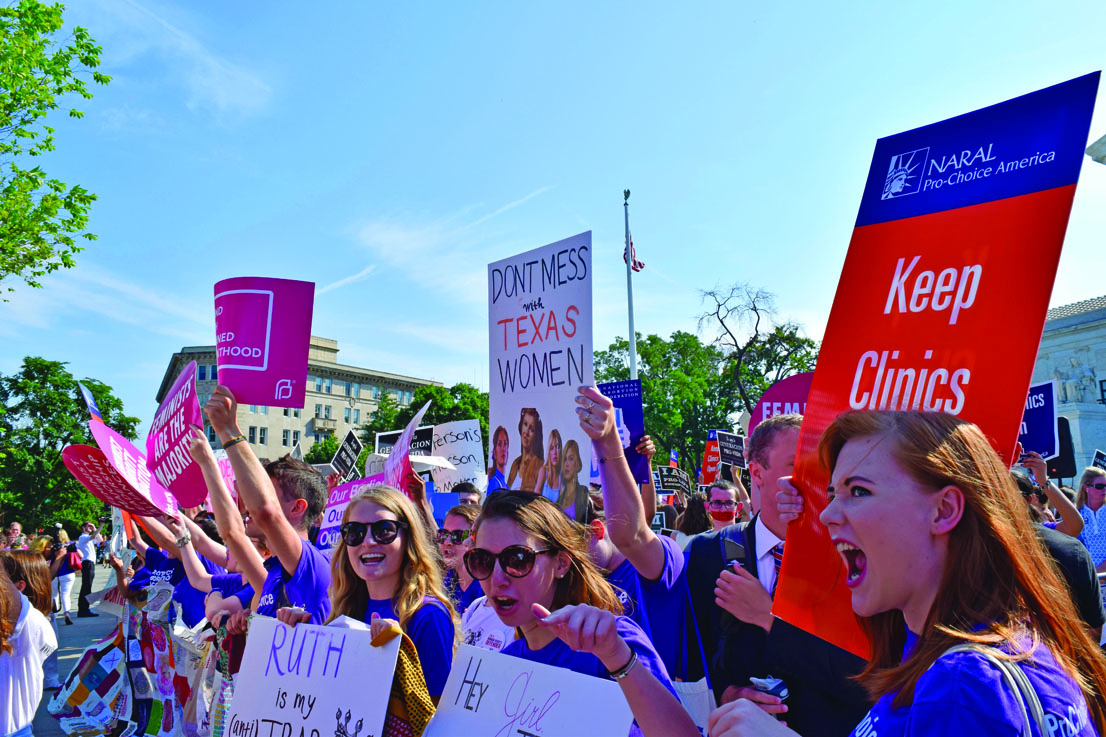 Build a mass movement to stop the Republicans 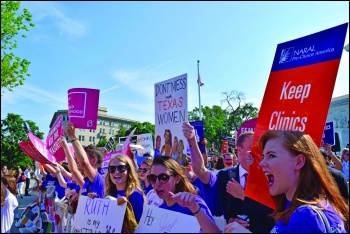 Thousands of people demonstrated outside a US Senate committee hearing against the appointment of Donald Trump’s Supreme Court nominee, Brett Kavanaugh.

Opponents of Kavanaugh say he is unfit to serve as a Supreme Court judge because of allegations that he sexually assaulted women in the 1980s.

While the committee narrowly approved his appointment, Kavanaugh will now be investigated by the FBI before a full vote in the Senate.

Republicans are desperate to get him appointed before November’s mid-term elections, which could see them lose control of the Senate.

Erin Brightwell of Socialist Alternative (the US co-thinkers of the Socialist Party) filed this report ahead of the Senate committee’s vote. Here, we carry edited extracts.

The nomination of Brett Kavanaugh to the Supreme Court, appearing only days ago to be a virtual lock, is now hanging by a thread.

If Kavanaugh is forced to withdraw, it will be due to the mass anger at widespread sexual abuse within society, and not due to the so-called resistance of the Democratic Party establishment.

It also reflects disgust at his bullying demeanour, which leant further weight to the charges he faces.

Kavanaugh, having amassed a thoroughly reactionary anti-woman, anti-worker, and pro-corporation record as a judge on the District of Columbia Court of Appeals, was already the most unpopular Supreme Court nominee since Robert Bork in 1987. Then Blasey Ford’s allegation of sexual assault was made public.

Kavanaugh should, in any case, have been challenged on the basis of his right-wing politics and, in particular, the threat he posed to Roe v Wade (the pro-abortion rights ruling), which is supported by 64% of Americans according to a July 2018 Gallup poll.

But the Democrats’ ‘resistance’ to Kavanaugh was limited to questioning in the Senate judiciary hearings, most notably by California Senator Kamala Harris.

The entire episode demonstrates the weakness of the Democratic Party. Now, presumably, their spines have been stiffened by the righteous anger of millions of people who cannot tolerate the casual acceptance of sexual assault among the ruling class.

Even before Kavanaugh’s alleged history of sexual assault was revealed, he was a serious threat to women’s rights.

Kavanaugh’s hostility to abortion rights was illustrated by his dissent in the DC Court of Appeals decision to allow a pregnant 17-year-old immigrant to have an abortion while she was being held in a private detention centre.

Kavanaugh agreed that the young woman had a right to an abortion, but suggested a legal solution that would have forced her to wait until she was more than 20 weeks pregnant, the absolute limit for abortions in Texas where she was being held.

Trump nominated Kavanaugh at least in part because he is seen as strongly anti-abortion, a position demanded by the highly organised Christian Right who bolster Trump’s base.

Kavanaugh’s confirmation would be a clear threat to women’s bodily autonomy and, while women’s groups organised direct actions during Kavanaugh’s Senate confirmation hearings, a broader fight against the nominee was possible even before the sexual assault allegations came to light.

The Kavanaugh nomination should be ringing alarm bells not just for women. He infamously wrote a dissent of the DC court’s decision to uphold an Occupational Safety and Health Administartion fine after Seaworld trainer Dawn Brancheau was killed by an Orca whale during a show, arguing that animal training was similar to professional sports and inherently risky – therefore the employer should have no responsibility for the safety of its trainers.

There are scores of cases in which Kavanaugh ruled against government regulations, including many that protected the environment. Kavanaugh is a model judge for big business and a serious threat to working people.

Between pressure from the right-wing base to get another conservative justice on the court before the midterms, when the Senate could swing to the Democrats, and the concern that even more allegations may surface against Kavanaugh, the Republicans are calculating how fast they can push the nomination through and are willing to brand themselves as the ‘party of predator enablers’ in the process.

At this point, with the massive anger at Kavanaugh’s nomination going forward despite the allegations against him, no Democratic Senator could possibly vote to confirm him without committing political suicide.

We should remember, however, that prior to Christine Blasey Ford coming forward, Kavanaugh’s confirmation seemed all but assured.

The Democratic Party leadership refused to enforce a party line vote on Kavanaugh because they felt that a vote against Kavanaugh could hurt the mid-term chances of Democratic Senators in states Trump won.

Women held protests across the country on 24 September and over 100 were arrested doing direct action at Senate offices in Washington DC.

But larger and more militant mass actions that shake the political establishment to its foundations could kill the Kavanaugh nomination once and for all.

From the Women’s Marches to the teachers’ strikes to the McDonald’s women’s strikes against sexual harassment, women have shown they are ready to move into action, including against sexual abuse.

Increasingly, there is a contradiction developing between the willingness of working class people to fight back against anti-abortion misogynists like Brett Kavanaugh and the Democratic Party establishment which does virtually nothing to organise a real resistance movement in the streets and workplaces.

The truth is that the Democratic Party fears the activism of working class people. Cancelling Kavanaugh is one thing, but the Democrats worry that once women, young people, and working people experience a big victory through protest, they will demand more changes that may not be acceptable to the party’s billionaire backers.

This whole awful situation speaks volumes about why we need an independent left party in this country with a pro-working class programme which could mobilise people not just in the voting booths but in the streets against Trump and the reactionary agenda of the right.

However, currently, there is understandably a massive desire on the left to punish the Republicans in the mid-terms by electing Democrats.

Furthermore, with a number of candidates running and winning on a programme similar to that of Bernie Sanders, a new progressive current in the Democratic Party is emerging.

Among these successful progressive candidates in Democratic primaries are a number running as socialists and members of Democratic Socialists of America (DSA), most notably Alexandria Ocasio Cortez .

While Socialist Alternative’s position is that socialists should build a party independent of the Democrats and big business, the DSA should test the limits of the Democratic Party on a concrete issue such as Brett Kavanaugh.

The DSA now has 50,000 members nationwide. It should join with its allies in the labour movement, as well as other left groups, to organise urgent protests, walkouts, and direct actions against Kavanaugh all across the country in the coming days, with a broad call to all those who want to defend Roe v Wade and fight against sexual assault.

Republican leaders appear to be prepared to push as hard as is necessary to get Kavanaugh onto the Supreme Court, while the Democrats are now forced to fully oppose Kavanaugh.

Unfortunately, the Democrats’ opposition will, in all likelihood, be limited to the Senate hearing itself, not drawing on the enormous potential power of the new movement that is building steam.

With the Democratic Party so far refusing to organise mass protests against Kavanaugh, it is up to the unions, the women’s organisations and other groups on the left, including the DSA, to bring Kavanaugh down once and for all, in the event that the weight of the multiple sexual assault accusations against him isn’t enough on its own.

More broadly, this issue highlights the role of the Senate and the Supreme Court in blocking the will of the people.

It raises for discussion in the US the need to sweep aside all undemocratic obstacles to realising the will of the majority.