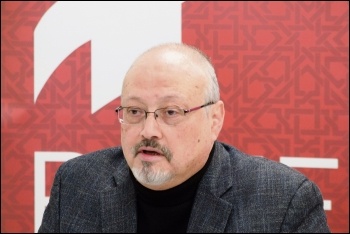 On 2 October, Khashoggi, who works for the Washington Post, had entered the Saudi consulate in Turkey to obtain a divorce document in order to marry his Turkish fiancé. According to her and the Turkish authorities he never came out of the building.

He had formerly edited newspapers in Saudi Arabia and acted as advisor to Saudi princes. However, he had become critical of some of the regime's policies and left the country last year as he feared reprisals.

This has led to fears that he was abducted and even killed by Saudi forces. Turkish authorities claim a group of men, including Saudi intelligence agents, flew to Istanbul from Riyadh and back again on a private jet on the day of the journalist's disappearance. These claims add to rumours that he died during interrogation. The Turkish police even claim to have audio footage proving that he was murdered.

Turkish and Saudi authorities are now conducting a joint investigation into the incident. However, two weeks after Mr Khashoggi's disappearance, and after cleaners have had a chance to thoroughly clean the building, it is unclear that this will be able to find any answers.

After initially making the claims, it seems like the Turkish regime have toned down their criticisms. Perhaps they are prioritising their international relations with Saudi Arabia over finding out what actually happened?

Criticism from Western countries has also been relatively muted. Labour Shadow Foreign Secretary Emily Thornberry has criticised the government for a slow response - they waited a week after the disappearance to demand answers from the Saudi regime.

Donald Trump has also sought to let the Saudi regime off the hook by suggesting responsibility may lie with rogue agents. He has rejected any suggestion that the incident could stop arms sales. He revealed the real interests of Western governments and businesses when he said: "I don't like stopping massive amounts of money that's being poured into our country - they are spending $110 billion on military equipment".

Saudi Arabia plays a key economic role as a major oil supplier. They are also an ally for the British government in the region and the UK is the second largest seller of arms to the Saudi regime.

While the disappearance of a US-based journalist has forced the spotlight on Saudi Arabia, the regime there has routinely repressed dissent within the country. They have also gone to war in Yemen which has led to humanitarian disaster and many civilian deaths.

The hypocrisy of the Tory government in relation to this case - dragging its feet to defend even the most basic journalistic right to criticise - shows once again that they place the interests of big businesses, including arms dealers, first.