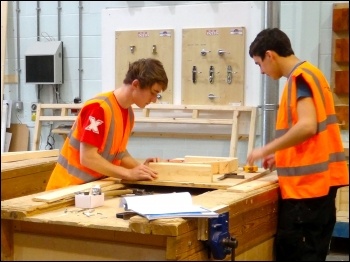 For the last two years I've been working as an apprentice through the training provider Aspire Achieve Advance or 3aaa. This all changed when the Education and Skills Funding Agency terminated all of its contracts with the company resulting in its collapse.

There is now a police investigation into fraud at 3aaa and 4,500 apprentices (including myself) are left guessing at what happens next. I'm lucky enough to still be employed, unlike the apprentices who were directly working for the company, who have found themselves jobless.

While it operated, 3aaa represented everything that's wrong with privatised education. They had enlisted me onto a course that they had no other students for with plans to hire a trainer if they were able to get enough to make it profitable. When no other students enlisted they decided to cancel the course.

I was being told that it wasn't profitable enough to provide the training I'd been promised in Leicester, while Peter Marples (the multimillionaire co-founder of 3aaa) was posing for photographs with sports clubs he'd given hundreds of thousands of pounds to!

After this I was placed onto a lower level course (from a Level 4 BTEC to a Level 3) which they did have a trainer for. Eventually I was able to get myself placed back onto the Level 4 course in Derby, where they did have a properly qualified trainer.

Months of my life were wasted by the greed of 3aaa. I'm now in a position where I can't be certain that the work I've completed since restarting the Level 4 qualification will have been for anything.

I've received a letter from the Education and Skills Funding Agency promising that I'll be able to "continue my learning" but have no guarantees of what that means.

Examples like this show that teaching for profit is a disaster for everyone involved - except the people on top who fund their vanity projects with our public money. Shutting down 3aaa hasn't fixed our broken education system.

In order to do that, we need to take education and training out of the bosses' hands and into our control.