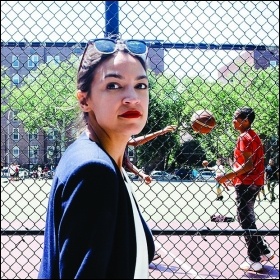 Tom Crean, Socialist Alternative (US co-thinkers of the Socialist Party)

The midterm elections in the US represented a limited 'blue (Democratic Party) wave' and an overall rejection of Trump by the electorate.

Republicans were relieved their losses weren't worse while many progressive workers and youth were disappointed the outcome wasn't more decisive.

In the election campaign Trump sought to mobilise his base by whipping up fear of immigrants and using overt racism while the Democrats focused on "rejecting hate" and defending Obamacare, but offered little that was concrete to working-class people.

At the same time a number of left and progressive candidates, almost all standing as Democrats, reflected the intense desire of millions to push back against the agenda of the right by refusing corporate money and putting forward bold pro-working-class demands like Medicare-for-All, rent control, a $15 minimum wage and free college tuition.

A number of self-described socialists won including Julia Salazar who is going to the New York state senate and Alexandria Ocasio Cortez and Rashida Tlaib, both heading to Congress.

Tlaib is also one of two Muslim American women elected to Congress, an historic first.

While the Democrats now control the House of Representatives, a vicious and reactionary regime is still in place in Washington and we can't wait until 2020 and the presidential election.

We urgently need to build a mass movement, centred on the social power of working people, that takes on and defeats the agenda of the right and fights to push Trump out.

In the coming months, both the Democratic leadership and the new left candidates elected to Congress and state legislatures will be put to the test of rising expectations and demands to confront Trump and the ruling class.

The last few weeks saw Trump ramp up xenophobic hysteria to a new and horrific level, even for him, trying to whip up fear to drive turnout of his base.

Previously he had used the Kavanaugh nomination process to the same end. He declared the migrant caravan from Central America which is winding through Mexico to be "an invasion", possibly created by the Democrats or funded by the liberal Jewish billionaire George Soros, and including MS13 gang members and terrorists from the Middle East!

He then ordered thousands of troops to the border to confront a peaceful procession of a few thousand desperate women, men and children fleeing the social chaos created by neoliberal policies promoted by US imperialism.

The Democratic leadership, on the other hand, chose very consciously to focus its attention on suburban districts and particularly on white women "with a college degree" who had previously tended to vote Republican.

But this was not combined with any bold proposal, along the lines of Medicare for All, or how to address the massive crisis in healthcare and the ongoing attacks of the Republicans.

Neither did the Democratic leadership attack Trump's corporate tax cuts or answer the collapse of family wage jobs by putting forward demands like a major green public works programme.

Instead, the Democrats used the unprecedented diversity of their candidates as a key selling point.

These approaches by the Democrats were effective to differing degrees but also reveal the party leadership's very limited message in response to the Republican onslaught and the desire of the Democrats' electoral base to defeat the agenda of the right.

Showing how out of touch they are, Democratic Party Congress leader Nancy Pelosi made a statement that they will take a "bipartisan" approach and "seek common ground where we can" with the Republicans. She again reiterated that trying to impeach Trump was off the agenda.

Undoubtedly this weakness helped to embolden Trump to fire Attorney General Jeff Sessions, a move clearly aimed to undermine the Mueller investigation into links between Trump's presidential cam-paign and Russian officials which is being overseen by the Justice Department.

There was a massive turnout for a midterm election with 30 million more voting than in the last midterm in 2014.

The Democrats gained 32 seats in the incoming House of Representatives, and are expected to pick up four more, giving them a comfortable majority.

The Democrats also made modest gains at the state level where the Republicans had dominated over the past decade.

They flipped seven governor positions including in some key midwestern states like Illinois and Michigan.

But only flipping eight state legislative chambers was a less impressive outcome for the Democrats, at least partly reflecting the gerrymandering of state districts.

On the other hand, Republicans expanded their Senate majority. But it must be remembered that the Senate is far less democratic in its composition given that every state has two representatives no matter how small its population.

Despite the victory of high profile democratic socialist Alexandria Ocasio Cortez and other progressives at federal and state levels, several outcomes were intensely disappointing to many progressive workers and youth.

This included the narrow defeat (subject to a recount) of African-American Andrew Gillum in Florida's gubernatorial (state governor) race by the out-and-out racist Ron de Santis, as well as the defeat of Beto O'Rourke in the Texas Senate race by the odious Ted Cruz.

The Democratic leadership is now of course claiming that the outcome vindicates their "moderate" approach.

In fact, O'Rourke had an outstanding result in a state where no state-wide race has been won by Democrats in 25 years.

These and a number of other races actually show that the shift to the left seen in big cities and among young people in other parts of the country has spread to the South.

Additional indications of the potential support for bold left policies in many areas of the country come from some of the results on ballot measures.

Florida voters restored voting rights to 1.4 million residents convicted of a felony who served their time. Anti-gerrymandering measures passed in Michigan and several other states.

There were also significant defeats due to massive corporate pushback and disinformation campaigns including Proposition 10, the California state-wide initiative to expand rent control. Measures to restrict abortion passed in Alabama and West Virginia.

In terms of 'centrist' Democratic strategy it stands out that powerful conservative Democrat Claire McCaskill lost in Missouri, the same state that just voted to raise the minimum wage and recently overwhelmingly rejected the anti-union so-called "right to work" legislation.

There is a growing understanding among hundreds of thousands that we need a political force determined to fight for ordinary people as hard as Trump is prepared to fight for the interests of billionaires.

As Socialist Alternative consistently argued, the project of trying to reform the Democratic Party or push it decisively to the left, which has engaged a large number of young activists, is understandable but almost certain to fail.

Bernie Sanders' presidential campaign in 2016 in which he raised over $200 million in small donations for a pro-working-class programme pointed to the massive potential for what the situation requires - a new independent left party based on the interests of working people and all the oppressed.

Such a party needs to be based on mass social struggle which is the real way the right will be defeated and serious gains won.

This year pointed to the potential for constructing a true, ongoing mass movement with the enormous mobilisations of women, student walkouts against gun violence and the highest number of strikes in nearly 20 years.

The teachers revolt in particular, concentrated in red states, showed the potential of the class struggle to galvanize wider sections of society.

The teachers had bold demands including taxing corporate interests to fund education and reverse decades of cuts that won mass support including among people who had voted for Trump.

In 2019 we will almost certainly see another wave of struggle - this must be combined with the building of an anti-corporate left political challenge to the establishment which will be the beginning of putting Trumpism on the run for good.