Link to this page: https://www.socialistparty.org.uk/articles/28284 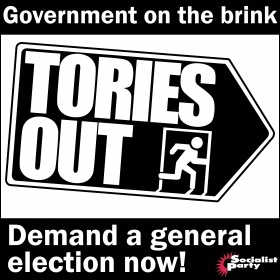 Theresa May's government is on the brink. This morning the resignations began. Esther McVey and Dominic Raab were first out the door, along with a number of junior ministers.

More could potentially follow them in the hours ahead. Coups, plots and leadership challenges are all being openly discussed.

The trade union and labour movement must intervene now.

Jeremy Corbyn and the trade union leaders should meet immediately to call and organise mass, emergency protest action to fight to kick out the Tory government and force a general election - a real 'people's vote'.

This version of this article was first posted on the Socialist Party website on 15 November 2018 and may vary slightly from the version subsequently printed in The Socialist.