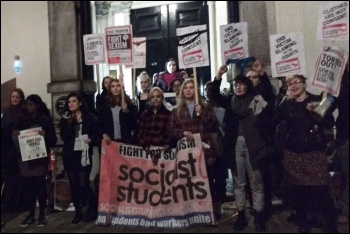 Protesting against victim-blaming outside the Irish embassy, 16.11.18, photo by James Ivens   (Click to enlarge)

Young women and men crowded round the Irish embassy in London on 16 November in solidarity with protests against the terrible treatment of young rape victims in Irish courts.

"You have to look at the way she was dressed. She was wearing a thong with a lace front."

These were the words of the barrister in a recent court case in Cork, where a 17-year-old's underwear was used as evidence against her accusation of sexual assault. The case has caused national and international outrage.

The London solidarity protest was called by Socialist Students. Enraged by the sexist actions of the courts, inspired by the protests in Ireland and the actions of Socialist Party member and Solidarity TD (MP) Ruth Coppinger holding up a lacy thong in the Irish parliament, nearly everyone on the protest signed up to get involved, and attend a Socialist Students meeting on 5 December on how to oust the Tories.

As well as lots of chanting, and speeches from Socialist Students London organiser Helen Pattison and UCL Socialist Students member Keishia Taylor, many protesters took the opportunity of our open mic to speak about their own experiences.

Socialist Party national organiser Sarah Sachs-Eldridge explained about Women's Lives Matter. This is a new campaign which is tackling head-on the big attacks taking place on women's refuges and women's services in Britain, calling on Labour councils to stop implementing the cuts.

Socialist Party London regional secretary Paula Mitchell explained the role of the organised working class in combating sexism, fighting to kick out the Tories and for a Corbyn-led government that stops the cuts and implements socialist policies.