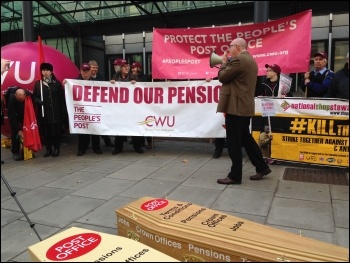 Post Office management has earmarked a further 74 government-run 'Crown' Post Offices to close and franchise out by 2019, in this case to retailer WHSmith.

The Post Office announced the closures only days after posting profits of around £35 million. By contrast, WHSmith has issued profit warnings and its future is not secure. Post Offices have already been totally lost after moving into shops which then closed.

If staff agree to transfer to WHSmith, then 'Tupe' transfer law protections only apply to their terms and conditions for 90 days. Staff in WHSmith are lower paid than Crown Post Office staff.

Readers of the Socialist report on some of the Communications Workers' Union (CWU) protests against closures that took place on Saturday 1 December.

Staff at the site in Ipswich are working from the WHSmith store already, but currently employed and trained by the government-owned Post Office.

Proposed changes would mean WHSmith could run the branch. This will likely mean cuts to services and worsening of employees' terms and conditions in the future.

CWU members gathered with other trade unionists at Westgate Street in Ipswich to support the Save the Post Office campaign.

One local CWU rep said: "If this is allowed to happen then it is another step in the race to the bottom for our members' terms and conditions. The Post Office runs at a profit, so there is no logic in this step.

"Unless, of course, it is the government selling more of the country's silverware to profit-making organisations that want to fill shareholders' pockets while providing less of a service."

The Post Office insists this is part of continuing 'modernisation' of services to meet customer needs. However, the campaign was very well supported by the public, with thousands of people signing petitions and giving full support on social media.

Queen Street, Nottingham is a very busy Crown Post Office due to close and move into WHSmith in January. Grantham, Mansfield and Solihull are also earmarked for closure in the Midlands.

26 people, mainly CWU members, protested against the closure outside the Post Office on 1 December. WHSmith services will be smaller with fewer staff and less expertise.

Nottingham CWU branch secretary Mark Harper said: "I collect 60 to 70 bags of post, collected at least six times a day, from Queen Street. It is one of the busiest Post Offices outside London.

A visitor who signed the petition said: "The staff talk to me and help me fill in forms. The Post Office is a vital part of the community."