Over 400 members of general union Unite working for housing charity Shelter are due to strike over pay. The 72-hour walkout from 11 December is in response to real-terms pay cuts. Workers demand a 3.5% increase.

Workers at the Historic Royal Palaces organised by civil service union PCS are balloting for strikes against pension cuts. The employer wants to close the 'final salary' scheme and move 120 staff to an inferior 'defined benefit' scheme. 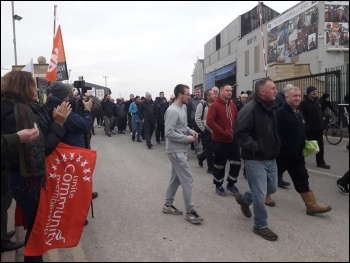 Unite has extended its rolling strike action and overtime ban at shipbuilder Cammell Laird after bosses refused to suspend 291 redundancies for talks.

Bus drivers organised by Unite are due to strike for higher pay in Durham and Keighley. The 650 workers in the north east demand a £1-an-hour raise, and workers in West Yorkshire demand 50p.