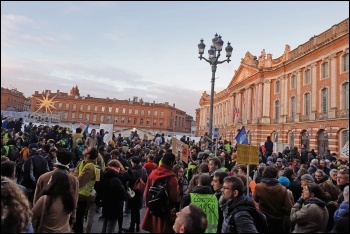 France has seen an apparently unstoppable revolt from below. Since Saturday 17 November, a massive tide of very visible protest has swept the country, initially against a rise in the tax on diesel, but rapidly becoming a revolt of the oppressed against 'the president of the rich' - Emmanuel Macron.

On the evening of Monday 10 December, after a day of talks between businesses, union leaders and the government, this most unpopular of presidents broke his silence to address the nation - and accepted he had 'upset' people.

Confirming the reversal of the fuel tax rise, he outlined a €10 billion package. This included a €100-a-month rise in the minimum wage, revision of levies on pensions, and a decrease in taxation on overtime pay.

But there was no talk of reversing the massive tax breaks Macron has given the super-rich from the earliest days of his still-short reign. A 'gilets jaunes' representative, Laetitia Dewalle, invited for comment by state TV channel France2, exclaimed: "Of course it's not enough!"

"Why should I listen to him?" said someone watching the broadcast. "He doesn't listen to us!"

The next day, Tuesday 11 December, saw a new wave of protests, including fierce battles between police and protesters, with large numbers of students mobilised. A number of scenarios could open up.

Together with his neoliberal party 'La République en Marche' (The Republic on the Move), President Macron has only been in power for 18 months. It is his resignation that every demonstration has been demanding.

Some protesters are veterans of France's month of revolution in May 1968, when the fate of strongman president General Charles de Gaulle hung in the balance. Others refer, light-heartedly, to the way Louis XVI met his end in the revolution of 1789!

This is not yet a revolution, but a very determined uprising of the neglected and deprived sections of the population - especially in the countryside. However, more and more, it has found an echo among layers of France's heroic working class.

The 'invisible' have become visible in their 'gilets jaunes' - yellow high-visibility vests, the uniform of the movement. Their good-natured blockades of roads and toll booths across the country have become a novel, now well-established, feature of this revolt.

As the protests have grown - including people of all political persuasions and none - so have the demands. Workers have joined the blockades and demonstrations in Paris and around the country.

It has inspired workers and young people across the border in Belgium, the Netherlands and elsewhere, who have had enough of austerity and pro-capitalist governments. Especially if it gains a major victory, the movement could well spread across Europe and beyond.

Many workers and young people are envious of the French people's penchant for exercising their 'constitutional right to revolt'! The Egyptian dictator General Sisi has banned the sale of yellow hi-vis vests, and even Mosul in Iraq is reported to have its own small gilets jaunes protest.

On Monday 10 December, a new impetus was given to the 'uprising' when students in 100 schools set up blockades and joined the struggle. Read more in the articles opposite. Students' entry onto the scene was undoubtedly a weighty factor behind the concessions made by Macron's prime minister Édouard Philippe on Tuesday 11 December.

The brutal use of state forces against demonstrators has only increased the determination of many protesters for a fight to the finish. Meanwhile, the ruling layer in French society is at sixes and sevens on how to proceed.

The middle layers in society are already involved in the movement. And the forces of the state have been overstretched - ripe for defection.

These are some of the features of a classical revolutionary scenario. But as yet there is no mass mobilisation of the most powerful force in society for change - the working class in the factories, the depots, the stations, the offices, the schools and the hospitals.

All these workers have already expressed grievances against their bosses or the government - or both! Many have been involved in determined but scattered strikes and struggles.

The Committee for a Workers' International (CWI) is the world socialist organisation the Socialist Party in England and Wales is affiliated to. We consider that the only force capable of decisive and lasting victory over capitalism is the working class - on the move, and with a clear, revolutionary leadership. As yet, these factors are missing.

However, the largest trade union federation in France - the CGT - has belatedly called for a build-up of strikes and demonstrations. A general strike could develop, even without a call from the top - as it did in 1968.

It could be limited but successful, like the mobilisation of two million public sector strikers in 1995 which defeated the pension 'reforms' of Jacques Chirac. The strategy - on either side - could be to allow a breathing space over Christmas before another round of battles in 2019.

Whatever happens, it is clear this battle with Macron and his capitalist backers is not over.

Former presidential candidate Jean-Luc Mélenchon, leader of the left-wing 'France Insoumise' (France Unbowed) electoral movement, has called for protesters to converge in the cities. He speaks of a "citizens' revolution," but makes no concrete proposals to carry it through.

The forces of the CWI in France, 'Gauche Révolutionnaire' (Revolutionary Left), are active participants in the movement, as are CWI supporters from other countries. On the blockades, in the lycées and on the mass protests.

A special issue of Gauche Révolutionnaire's newspaper, Égalité, calls for a one-day general strike as the next step to mobilise for bringing down this hated government.

A feature of this movement has been widespread comments of previously comfortable layers of the middle class now forced into the ranks of the working class. Similar moods and sentiments lie behind much of the growth of left and right populism in other countries, along with the surviving post-Stalinist hostility towards organising parties - the perceived risk of top-down policy-making. It means the movement is diffuse.

But the crucial element which can turn this massive cry of rage into a force for transforming society is a party. This must have socialism as its clear aim - not just in its name, devoid of all meaning like the discredited 'Socialist' and 'Communist' parties in France.

Macron may sacrifice his prime minister. He may even be forced to resign himself. New elections may be called.

But any government which stays in charge of an economy where the commanding heights are largely in the hands of private owners will return again and again to make the workers and poor pay for the bosses' recurring crises.

"Now that you feel your power," socialists say, "why not link up representative elected committees on a local, regional and national level, and make a bid to get rid of the government?"

Jean-Luc Mélenchon has called for a constituent assembly. Why not make it an assembly of revolt, with democratically elected representatives at all levels, including from assemblies in the workplaces?

It could have as its programme all the demands of the movement - plus nationalising the big banks and top companies, which form the basis of French capitalism, and where the friends of Macron get their easy wealth. The watchwords of the French Revolution of 1789 - "liberty, equality and fraternity" - can only be secured on the basis of socialism!

Eyewitness: Macron's concessions 'too little, too late' as movement spreads

Negative media attention and running battles with the notorious French riot police, the CRS, have done nothing to dent popular support for the 'gilets jaunes'. In fact, the violent, repressive tactics of the state - tear gas, beatings, mass arrests including of school students - have met with a wave of public disgust.

Students have blockaded some 'lycées' - state schools for 15 to 18-year-olds - in protest against Macron's proposals to restrict university entrance. On Friday 30 November, the Union Nationale Lycéenne (UNL - National Union of Lycée Students) had also put out a call for blockades.

Students call for university courses to be open to all who achieve their 'baccalauréat' leaving exam, without additional selection based on opaque and unfair criteria. Our daughter Isabelle, a 15-year-old lycée student in Carmaux, describes the protest at her lycée on Friday 7 December below.

The UNL has not declared itself part of the gilets jaunes movement. Some of the student protesters wear the high-vis vest, some don't. But they all recognise their joint interests in fighting austerity and for increased public spending.

Protests in city centres have attracted the most media attention, but in France arguably the blockaded roads and gilets jaunes-controlled highways are the most enduring image.

On the way to the Toulouse demonstration on Saturday 8 December we went through three major blockades, including a toll booth with free passage courtesy of the protesters. At the roundabouts, with semi-permanent campsites erected, the occupation is continuous.

In Toulouse, thousands of gilets jaunes and environmental protesters flooded into the city centre. Shops drew their shutters down. Public transport was halted.

The main focus was the town hall. Protesters surrounded the building which was guarded by riot police, with shouts of derision and gestures towards the police helicopter hovering overhead.

Cries of "tous ensemble!" (all together) and "Macron démission!" (resign) were interspersed with the singing of La Marseillaise, France's national anthem and the defining song of the French Revolution. On the way back at least one major road was closed by a bonfire straddling three lanes.

The effects of Macron's diesel tax on rural areas, where absence of public transport means many rely on their cars for work, school runs and family care, was the final straw for millions bearing the brunt of his big business agenda.

They received his promise to delay tax increases on diesel for six months as "trop peu, trop tard" (too little, too late). Their demands had already progressed from simply withdrawing the tax hike to greater 'pouvoir d'achat' (spending power). Could this be Macron's 'poll tax moment'? 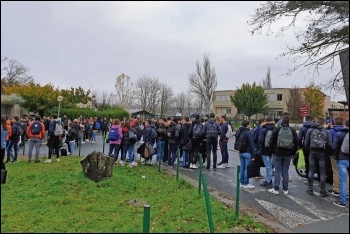 School students in Carmaux, France, blockade their lycée against attacks on education, 7.12.18   (Click to enlarge)

We heard that other lycées had been blockaded all week and some of the students wanted to join in.

An anonymous blog was circulating on social media calling for us to join the protests, so we organised to meet up before school and block the entrance.

There were about 100 of us, and we were a bit worried the police might come to break up the demonstration, especially when we saw some of the images on Facebook of kids being beaten and pushed around by the CRS.

There were police, but they weren't the CRS, and they just stayed in the background while we were in front of the school gates.

After a couple of hours we marched to the town centre. The police drove with the march and blocked the roads to traffic while we marched through.

A lot of passing motorists were sounding their horns to support us. We went to the town hall to make the government hear us, and we later joined some of the gilets jaunes to march together against Macron and his government.

About two-thirds of the students from my year didn't attend classes.