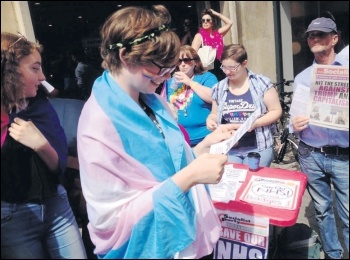 The growing Socialist Party LGBT+ group held its first national meeting of the year on 6 January.

Around 20 of members met in London to discuss how we can fight for LGBT+ rights and build a mass movement against oppression.

The meeting started with a general discussion on perspectives in the era of capitalist crisis.

We talked about the issues facing LGBT+ people and the importance of linking the struggle for LGBT+ liberation with other movements of the working class and, ultimately, to the wider fight to end the capitalist system which props itself up on our suffering.

Members reported back on their positive interventions at local prides.

A common theme was that our message - "pride is political" - was well received by members of the public who are tired of corporate attempts to turn pride into an apolitical celebration without the potential to bring the real change we need.

In the afternoon we discussed how the group can build the Socialist Party and laid out ideas for producing more material for the LGBT+ movement, including a new pamphlet and articles for the Socialist.

We talked about the key role of the party branches in LGBT+ campaigns and agreed on taking the discussion back into the branches. This will help to develop ideas around LGBT+ rights and give members the confidence to take part in our interventions around pride and other LGBT+ movements.

It's clear from the enthusiastic mood of the meeting that the LGBT+ group will continue to grow, develop and help to fight for socialism!