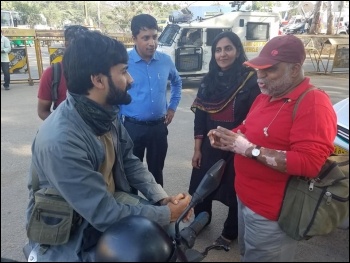 CWI members including Seattle councillor Kshama Sawant, visiting from the US, take part in the Indian strike, photo Calvin Priest   (Click to enlarge)

Why did 200 million workers strike on 8-9 January?

India's capitalist class has failed to bring an end to the brutal and deeply entrenched caste system. 2,920 'communal incidents' were reported over four years - 389 were killed and 8,890 injured.

They have not only let loose their goons to lynch, kill and terrorise Muslims, Dalits and other oppressed minorities, but even create an aura of great achievements and in that way polarise society on communal and sectarian lines.

Rural India, home to 66% of the population, still languishes in poverty. The highest paid member of three-quarters of rural households earns just 5,000 rupees (£54) a month.

For more than two years, no concrete steps have been taken to implement a promised £164 minimum wage. We demand a living minimum wage of 25,000 rupees.

The strike is raising hope that the hated Modi premiership may come to an end in this year's elections.

But communist parties and others are yet again advocating the disastrous policy of 'lesser evilism', and promoting a congress-led coalition as an alternative to the right-wing, authoritarian and communal Modi.

Our members distributed thousands of leaflets (and ran out), in English and Kannada, on the days of the general strike.

This strike can help build an independent working-class-led socialist alternative, allying with all the oppressed sections of society.