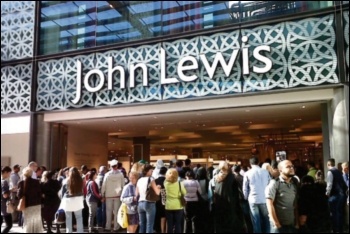 As a John Lewis retail worker I was gutted to hear that for the first time in 66 years the John Lewis leadership might suspend the annual staff bonus.

What is even worse is that they admitted they could afford to pay a modest bonus but may choose not to due to "unusual economic circumstances". Brexit and the crisis on the high street were both blamed.

But many of the low-paid staff at John Lewis (and Waitrose which is also part of the partnership) cannot afford not to receive a bonus! Especially since the bonus last year was cut for the fifth year in a row and was only 5% of a worker's annual salary.

This is not very much when you consider that non-management workers start on salaries that are well below the £10 an hour that both the Socialist Party and the shop workers' union Usdaw demand should be the absolute minimum for all workers.

John Lewis's 'employee-owned' partnership model means the company is viewed by some as a fantastic place to work.

However, this is at odds with how many staff feel. Morale is low and we are expected to offer the same high level of service with less and less staff.

Although management likes to emphasise that we are all 'co-owners', employee concerns are usually downplayed or ignored. There is no union recognition which makes it harder to organise with colleagues to fight for improvements.

The company has its own 'democracy structures', which many workers do engage with to try and get their voice heard.

However, many quickly get disillusioned with them as, without the right to strike or collective bargaining that trade unions bring, it means that, in reality, these structures don't have any teeth.

In many ways, working at John Lewis feels like working for any other retailer. Premium pay for Sundays and bank holidays are things of the past. They were scrapped for all new workers several years ago.

It's a very uncertain time for retail workers right now and it feels like almost every week another high street retailer is in trouble. The most recent is M&S, which has announced a further 17 store closures, putting 1,045 jobs at risk.

The Socialist Party argues that these failing retailers should not be allowed to sack workers and should instead be brought into public ownership.

Trade unions need to reach out to retail workers in unorganised workplaces who would be receptive to campaigns such as Usdaw's 'Time for Better Pay' which not only demands a £10-an-hour minimum wage but also an end to zero-hour contracts, which many retail workers are currently on. This campaign must be backed up with a willingness to organise serious action.

All I want is to be able to do my job effectively, with the right resources, and be paid fairly for it.