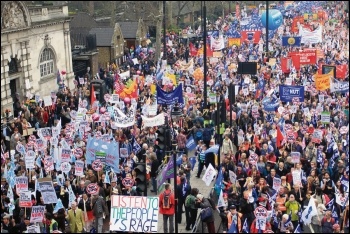 Trade unionists marching against austerity, 26.3.11 - given a lead, workers will fight, photo by Paul Mattsson   (Click to enlarge)

"Christmas is only just over and it's already the end of May". That was the comment of one social media user after the government's historic 15 January defeat in parliament on the Brexit deal.

But Theresa May has so far managed to limp on. And there's no guarantee her rotten government will simply fall as some expected.

The Tories need to be pushed out.

As we go to press, May could be facing further defeats in parliament as the House of Commons debates proposed amendments to her Brexit deal.

Yet, despite the chaos, the representatives of the capitalist class in parliament - including Blairites, Tories and (nearly extinct) Lib Dems - still fear a general election and the possibility of a Jeremy Corbyn-led government.

That's why huge pressure continues to be heaped on Corbyn to drop his calls for a general election and instead support a second referendum over EU membership.

Working-class people know we need to get rid of the Tories. But we can't just wish for a general election or hope for austerity to end. The workers' movement has a vital role to play in forcing the government out. 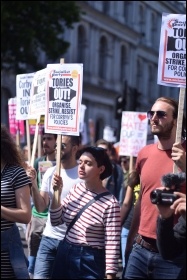 Imagine if Corbyn initiated another vote of no confidence in May's government. And imagine if this time, outside parliament, there were tens of thousands of trade unionists and anti-austerity campaigners demonstrating.

Imagine if they had been called onto the streets by Corbyn and the unions - demanding a general election. Imagine if they were preparing for further action.

This kind of mass pressure could have a decisive effect.

The RMT transport union has given a small glimpse of what could be done. It has attempted make its mark on the Brexit negotiations by calling a series of rallies with its seafarer members.

This initiative was taken after the government made headlines for its 'no-deal Brexit ferry deal' - a deal it struck with a company which owns no actual ferries! The RMT is fighting to secure decent working conditions and wages to stop a race to the bottom for seafarers.

We have all known since the June 2017 election that this government is weak and wobbly. But over the last 18 months working-class people have continued to suffer austerity. It's time to force out the rotten Tories. It's time for them to go.