Walthamstow: Hands off our public amenities 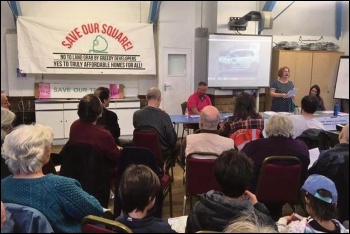 'We aren't going away'. That was the mood of the public meeting of around 60 people organised by the Save Our Square campaign on 26 January.

The meeting to organise resistance against the destruction of 81 mature deciduous trees in the town square heard two testimonials from brave activists - Calvin Payne from the campaign to defend 17,500 trees from Blairite council vandalism in Sheffield, and Melanie Strickland, facing a prison sentence for action to prevent unfair deportations (the Stansted 15).

The anti-tree atrocity is part of the right-wing Labour council's widely opposed plans to hand over the town square to private developers to build four tower blocks of unaffordable apartments of up to 29 storeys. Our campaign fights to defend our trees and public spaces - and for council homes for the families and young people in housing need.

Calvin's report was invaluable, demonstrating how organised and determined campaigning can stop the tree felling (13,000 saved).

However, Melanie's report of how the Stansted 15 were found guilty under anti-terror laws is a warning of how this legislation will be used against activists organising peaceful and effective solidarity.

The campaign has taken every form of action to appeal to the council to halt the destruction of the square and the trees - from winning the argument at the planning meeting, to protests, mass petitions and an occupation of the square, and more. The council is in no doubt about the huge extent of opposition to their plans.

This meeting was preparing the next step - to be ready to physically prevent our trees being destroyed.

Almost the entire meeting signed up to join the Tree Defenders Whatsapp list to be both the eyes and ears of the campaign, letting everyone know if contractors move in. But most importantly, this is a step to building up a network of people ready to do what's necessary to stop our trees being destroyed.

The Stansted 15 will be sentenced on 6 February in Chelmsford. Please attend the court in solidarity or send solidarity messages via Waltham Forest Trades Council: [email protected]