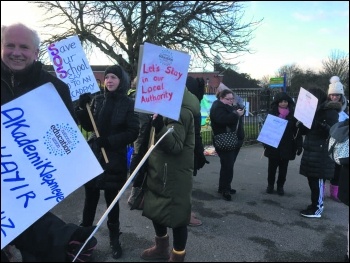 Big picket lines, lots of support from parents, lots of solidarity visits from other trade unionists - this has been the scene on each of the four days of strike action taken by National Education Union members at Galliards Primary School in Enfield, north London. They are fighting academisation.

At a public meeting on 7 February, Labour councillors, including the leader of the council, pledged their support for the strike and their opposition to academies. Enfield is an area where there has been ferment in the Labour Party recently. Enfield North Labour Party (a neighbouring parliamentary constituency in the same council area) voted no confidence in ultra-Blairite MP Joan Ryan and passed a resolution for a no-cuts council budget.

A Socialist Party member suggested the councillors should take a vote in the council chamber against academies. They could call the school governors to account at a scrutiny committee, and they could use their powers to hold a parents' ballot.

This got applause - but the biggest applause was for the call to stop passing on Tory cuts. A councillor was the next to speak, and promised never to vote for cuts again! Strikers and parents talked about attending the council lobby on 27 February, to make sure councillors act on their promises to support them.