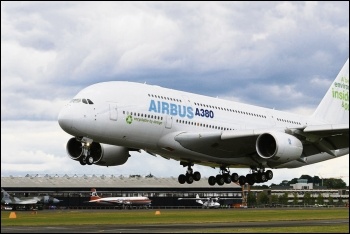 Thousands of jobs at plane manufacturer Airbus are under threat after the company announced it is ending production of its A380 passenger jet after failing to secure orders from the Emirates airline and others.

The move could affect 3,500 Airbus jobs at its wing-making factory in Broughton, north Wales and in Filton near Bristol, where landing gear and fuel systems are made.

The company employs around 9,000 workers in Britain altogether with two thirds of those at the Broughton site.

Bosses at this stage say that any potential job losses are being "evaluated" and Rhys McCarthy, the national officer for aerospace at Unite the Union, said the union is seeking assurances from Airbus that there will be no job losses.

But Unite should also demand that the Labour-led Welsh Government, with new first minister Mark Drakeford, nationalise the Broughton plant to save jobs with a demand also made that the plant in Filton is also taken over by the Westminster government.

Airbus is not alone in British manufacturing in threatening job losses. In the car industry, Ford and Jaguar Land Rover have been joined by Honda in threatening plant closures.

Jeremy Corbyn should pledge now that a government led by him would promise to nationalise any manufacturing plant threatening job cuts and establish a national plan for the manufacturing industries.

With the Tories hanging by a thread in Westminster, this could raise the sights of workers and pile on the pressure. But action is needed now.