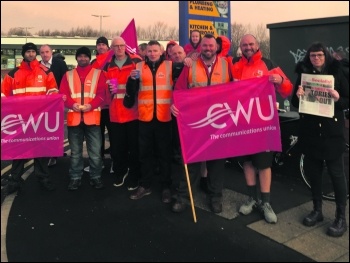 It was a red-letter day for 40 workers, from the Communication Workers Union (CWU), on their picket line on 22 February at the Royal Mail delivery office in Wythenshawe, Manchester. They struck again three days later.

CWU members have struck against "two instances of unacceptable use of the conduct code." The local CWU rep Phil Tickle says they "are just two specific examples of widespread, historic and continuing, unacceptable and unnecessary, behaviour of management towards staff."

Victimisation and unfair use of disciplinary action against two staff members were cited as the catalysts for the current action, which 88% of union members voted for.

One staff member was allegedly disciplined for calling in sick with stress, while another reportedly faced action for allegedly posting a complaint of management bullying on social media.

It was reported that one worker was given a suspended dismissal and both were given forced transfers.

Many workers outside the gates lamented management's totally unacceptable attitude towards staff.

One CWU member said there are now "39 statements from staff about the [management's] unacceptable behaviour, which have never been addressed."

The picket was lively and Socialist Party members were warmly welcomed - six striking workers bought copies of the Socialist, stating: "If you support us, we're going to support you".

The solidarity shown from the rush hour traffic meant a lot to the workers. They were particularly buoyed by shouts and 'sirens of solidarity' from two fire engines - budget cuts could see six fire stations close.

The manager sneering from beyond the depot gates, while they waited for other managers from across the region to arrive, did not dampen the workers' spirits. One worker made the point that "if it's this easy to get managers over here at short notice to cover us, what are they doing the rest of the time?"

Kieran Regan, CWU area delivery rep, said: "Our comrades are stood here today against the bullying culture still practised by some management within Royal Mail. Nobody should go to work to be bullied!"