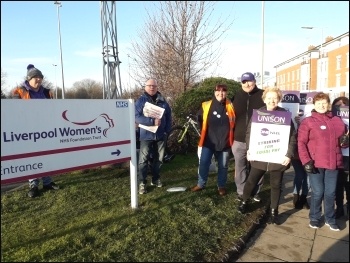 Outsourced workers at Liverpool Women’s Hospital were on strike on 25 February because they’re paid less by their private company OCS than staff working directly for the NHS.

Pickets were lively and determined, reflecting the 100% vote for strike action, on a 90% turnout, when the members of public sector union Unison balloted.

At the Walton centre in Liverpool, a strike over a similar issue was averted. In Bolton and Wigan last year, successful strikes won the NHS rate for the job for outsourced workers.

Strikers know that if they fight they can win, and will take further action if a solution isn’t found.

They have the full support of Liverpool Socialist Party, local NHS campaigns and the wider workers’ movement.