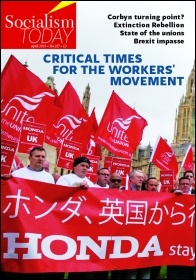 As the first act in the Brexit drama reaches its concluding scenes, only one thing about the plot is certain.

The reverberations from the working-class revolt against the capitalist establishment which, at bottom, the 2016 EU referendum result represented – a shout of rage at the age of austerity ushered in by the 2007-08 financial crash – will not end at that point.

Approving a withdrawal agreement treaty between British capitalism and the 27 other EU capitalist nation states was meant to be the easy part of Brexit.

The more difficult next step was renegotiating Britain’s 46-year economic, legal-political and military-diplomatic ties with the EU club, including a new trade deal.

And yet, at the time of writing, days after another humiliating defeat for Theresa May’s proposed withdrawal treaty text, nothing has been agreed.

The parliamentary vote to rule out a ‘no-deal’ exit also resolves nothing, even in its own terms. Carrying no legislative weight, it does not alter the fact that the default position is for Britain to formally leave the EU structures and treaties on 29 March – unless the provision specifying this within the 2018 European Union (Withdrawal) Act is repealed by another parliamentary vote, and the EU27 heads of state unanimously agree to extend Article 50 beyond that date.

Or alternatively, that the UK’s Article 50 application to leave the EU is revoked by the government.

But nothing is straightforward. More Tory MPs voted against the government’s motion to allow for a postponement of Brexit day than supported it – by 188 to 114 – including the Brexit secretary Stephen Barclay, who had just wound up the parliamentary debate for the government! On the other hand, there will be a temptation for the EU27 leaders, facing European parliamentary elections in May, to place conditions on any extension – including UK participation in the elections – never mind the issue of additional UK payments to the EU budget.

The reality is that any move to try and untangle the Brexit imbroglio will have to overcome the same conflicting interests, economic and political, within and between the different capitalist classes of the EU states and their political representatives, which have led to the current impasse.

Further Westminster paralysis, an acrimonious breakdown of negotiations between Britain and the EU27 and an ‘accidental’ no-deal exit, a cabinet rebellion and the defenestration of May, a general election, a Corbyn-led government or another hung parliament – all these possibilities and other variants, too, are inherent in the unfolding situation.

In broad terms the capitalist politicians have not been able to reach agreement over Brexit for the same reasons that capitalism is not able to bring about ‘an ever greater union’ of the peoples of Europe through the EU treaties, despite having gone far in creating a pan-European economic bloc.

The bosses’ organisations have been holding their heads in despair at the Brexit negotiations, with the director general of the Confederation of British Industry (CBI), Carolyn Fairburn, denouncing Westminster as “a circus” delivering “failed politics”.

The EU is a bosses’ club, designed to facilitate the systematic exploitation of the working class by big business on a continental scale.

So, why can’t the political representatives of capitalism – in Britain and the EU27 – just agree on how to share out the loot?

But the capitalists’ control of the productive forces through private ownership is not the only pillar on which the capitalist system is based.

There is also the nation state, the terrain on which capitalism first emerged in the Low Countries and Britain, and then across the globe.

The nation state is not only an economic entity but a social and political formation, with historically rooted features, such as territorial boundaries, language and culture, not mechanically changed by purely economic forces and which remain organic elements of capitalist society.

They provide the conditions for capitalist politicians to attempt to build a social base for their rule, becoming particularly significant in times of economic crisis when the need to justify ideologically a system in which a small minority exploit the majority becomes most acute.

These are the underlying contradictions on which the Brexit negotiations have floundered and which are preventing an easy resolution. Capitalism is a system of political economy, not economics alone.

This was what lay behind the warning of the Tory chancellor Philip Hammond when he spoke at a CBI lunch at this year’s World Economic Forum in Davos.

Hammond, who supported remain in 2016, now lectured the assembled bosses that “it would be a pyrrhic victory” to abandon Brexit to meet business interests “by shattering our country’s political and economic system”.

Some form of Brexit could not be avoided, in other words, without seismic consequences. Unable to overcome the contradictions, however, it is precisely seismic events that are coming.

If there are limits to the cooperation of the capitalist politicians of the different nation states of the EU, it is because, in the final analysis, they represent the interests of their respective capitalist classes.

The working class, on the other hand, has no stake in capitalism and its interests are the same whether they are German, British, Italian, or Greek, etc – including, therefore, a shared interest in real international solidarity. The task is to give expression to this programmatically and organisationally.

These are critical times for the workers’ movement. While there undoubtedly is scaremongering involved, a no-deal exit will produce economic dislocation, at the very least, while the bosses will use the cover of Brexit to push through job losses, closures and other attacks on workers’ conditions.

This will be latched-onto by the right-wing Tory Brexiteers to blame remain-supporting MPs and civil servants for blocking necessary preparations.

The emergency deals that will be negotiated on planes landing, people and goods crossing borders, the mutual recognition of standards and so on, will then be denounced as ‘giving in to Brussels’.

The propaganda of the right could get an echo, unless a viable force can offer a real alternative of workers’ solidarity and decisive socialist action against big business to end the chaos.

This must include the trade unions urgently raising a programme of opening the books to workers’ inspection of all companies threatening investment strikes or redundancies – as Honda, Jaguar Land Rover, Ford, Nissan, Airbus and others have announced – and, where necessary, nationalisation under democratic working-class control and management.

Public ownership would only be the first step in securing the future of workers facing Brexit chaos, but it would preserve the plant, machinery and accumulated skills of the workforces, which potentially could be applied to a range of other products.

Managed by elected representatives of the workers and the wider community, they could then begin an ‘audit’ of society’s real needs.

This would include, for example, the urgent need to move to a low-carbon economy, giving a working-class lead to the growing movement of young people against climate change [see this month’s Global Warning column in Socialism Today].

Fighting for trade union leaderships that will take such a stand is a key task for socialists in this period, as the article by Rob Williams [also in the journal] explains.

This must go hand-in-hand with the workers’ movement preparing for the challenges of a possible Corbyn-led government, explored by Hannah Sell [in the same journal].

The conclusion is clear. The world economy has barely recovered from the consequences of 2007-08, and the looming prospect of a new downturn is the backdrop against which the next acts of the Brexit drama will play.

The capitalists have no solution. Only the workers’ movement armed with a socialist programme can point a clear way out of the Brexit impasse.