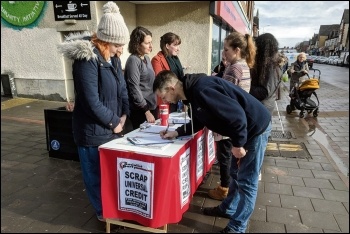 Growing numbers of welfare claimants impoverished by Universal Credit, benefit sanctions or cuts to single parents allowance, are forced into selling their bodies to pay for rent or feed their families.

Universal Credit is a brutal benefits system that's not fit for purpose. Instead of helping people out of poverty, it is pushing them further into desperate and dangerous situations. It needs to be scrapped immediately.

Younger people in particular are exploited by sexist, greedy landlords, using the situation of high rents and low pay to encourage them to take rooms at low or zero rent in exchange for sex.

MPs have now been forced to launch an inquiry to investigate. How much more evidence does the government need to see? How many more reports are required to make them face up to reality?

Ten years of austerity, and 14 million people - including 4.5 million children - live in poverty, according to the Social Metrics Commission. In-work poverty is soaring due to low wages and zero-hour contracts. And wherever Universal Credit is rolled out, the Trussell Trust reports food bank use goes up by an average 52% within 12 months.

Austerity and cuts to the welfare state have disproportionately affected women workers. We face double oppression in capitalist society: oppressed and exploited both as workers, and as women.

The oppression faced by working-class women has only increased since the implementation of austerity. Self-described feminist MPs who have backed austerity - such as the Blairites Stella Creasy and Jess Phillips - should be ashamed of themselves.

Tory and Blairite women MPs have spoken to the media about their supposed joint efforts for women's equality, while at the same time voting for or abstaining on cuts! We don't want the feminism of the bosses, where wealthy individual women rise to preside over continuing misery for the rest of us. We need socialist feminism: fighting for working-class women and all workers in deed as well as word.

The Socialist Party argues that the fight for women's liberation is linked to the fight against austerity and capitalism. We stand for a programme that can unite the whole working class - women and men - to fight the cause of our misery.

Only socialist policies - such as fully funding jobs, homes and public services for all, a real living wage, reversing all cuts and sell-offs, scrapping Universal Credit, building council homes - can liberate women from this desperate situation. And only working-class action to take the wealth and power off the super-rich 1% can overcome the barrier of the profit motive.

Part of the immediate action we need, to fight for women's liberation, is mass action for a general election now to kick out the Tories. Corbyn and the union leaders must urgently build for that action.