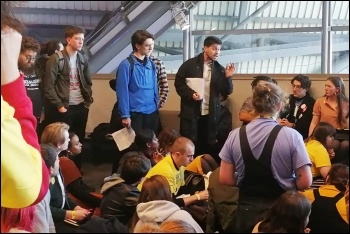 It contained proposals which included swingeing cuts to full-time officers and campaigns, moves towards online voting for 'consultation' on NUS's political direction, and cuts to the National Executive Council.

Amendments were submitted which slightly curbed some of the attacks to NUS democracy. Some self-described 'left' delegates argued that with enough of the amendments passed, the reform motion should be voted for as it represented a chance to 'save' the NUS.

Socialist Students' delegates campaigned and spoke both at caucuses of left delegates as well as from the conference floor, highlighting that even with all the 'progressive' amendments passed, the final reform motion would still represent a huge attack on democracy within the NUS, as well as diminishing its ability to play a leading role in future mass student struggles - reducing its role to a think tank.

Socialist Students delegates highlighted the potential solutions to the financial crisis which are available to the NUS on the basis of a fighting and democratic leadership conducting a political campaign among its members.

Of course it is impossible to say exactly how these reforms will take shape over the coming weeks and months. Socialist Students is calling for the convening of emergency student meetings, dedicated to discussing the task of building the democratic and fighting national student union we need.

Out of this could come an extraordinary national conference of all students and campaigners. Such a conference could democratically discuss the way forward in the aftermath of this reform motion.

These meetings and conference, even if acted on by only a handful of student unions initially, could decide whether or not to continue the fight to save the NUS in its current form, or to begin to take the steps necessary to found a new national student union.