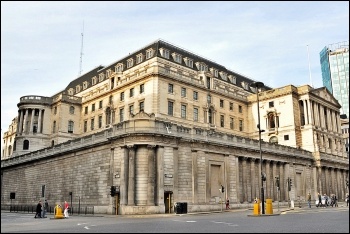 The Bank of England sets interest rates on loans to financial institutions, photo by Eluveitie/CC   (Click to enlarge)

£400 billion worth of land - about 10% of the land mass - has been privatised since 1979, making it the biggest single privatisation, according to economist Brett Christophers. He calls this process the new enclosure and it isn't helping the provision of affordable housing!

Labour has announced that the Bank of England could be set a target for house-price inflation. Under the proposals, the bank would be mandated to guide house-price growth within levels set by the government, in the same way that the central bank is handed a target to keep general inflation at around 2%.

As rising prices push home ownership out of reach, lack of social housing means that the insecure private-rented sector is the only option for many. Advocates of setting a target to limit housing and land inflation say it would build an economy that works for "those who live off work, not those who live off wealth."

Even this limited proposal has produced a ferocious response from property capitalists, a foretaste of the opposition a Jeremy Corbyn government would face. The chief executive of a major estate agency told Estate Agent Today the idea was "bordering on the insane" given past records of governments 'interfering' with the market.

But for years governments have interfered in markets to support those who own land and "live off wealth", driving up land prices and therefore the cost of housing.

Brett Christophers says land accounted for just 2% of the price of residential property in the 1930s, now it's closer to 70%. It is easy to see why Labour's proposal is attractive.

Establishment economist Kate Barker warned: "A house price target is a difficult one for government. It is totally absurd for the Bank of England unless given control of a whole other range of policies."

Rather than giving yet more power to the Bank of England - made 'independent' as one of the first acts of the Blair government, to the delight of business - all the main banks and financial system should be nationalised and made accountable to the aims of a Corbyn government.

In the financial crisis, the banks were bailed out and some were nationalised but then run on the same old capitalist principles. So the rich have continued to get richer since the crash.

The howls of protest show that Corbyn should expect no gratitude from finance for half measures. The way to overcome the deep sickness of capitalism is through a bold socialist plan.

To stop the enrichment of landowners which drives the housing crisis it is time to act. Nationalised banks and house builders could mobilise resources for a mass programme of building genuinely affordable council housing.