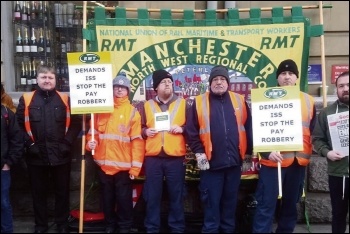 Currently, cleaners work five days in arrears. But their bosses' unilateral decision to move the pay will mean waiting up to an extra two weeks for their wages in May.

ISS is a global cleaning and facilities company based in Denmark. It holds dozens of major contracts across Britain in both the private and public sectors, including in several major hospitals.

In 2018, ISS posted net profits of £33.5 million. Despite this, it still pays some of the lowest wages in the sector.

It's not just railway cleaners affected. ISS catering staff at hospitals across the country have been forced to use food banks while they wait for pay.

One worker on the protest told us he was advised he could ask the company for up to £300 to tide him over. But then he must begin paying this back from his next wage packet at the rate of £50 a week!

Another reported that he actually worked at Bolton station, but having heard about the protest in Manchester he "just had to come down." This was despite not getting back from work until after 11pm the previous evening, and having had to get up at 5.30am to make the protest, after which he had to jump on a train back to Bolton to start his next shift.

This two-hour protest could develop into further action, with one worker calling on the union to organise an eight-hour walkout in the coming weeks. Five workers bought a copy of the Socialist newspaper.

The Socialist Party demands that private firms are kicked out, and that public transport along with all support functions is brought into public ownership under democratic workers' control and management.