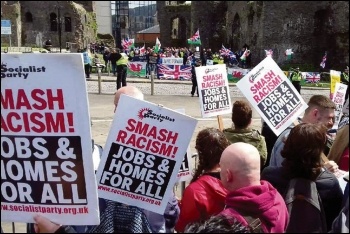 Socialist Party placards were prominent on the demo against the far right in Swansea, 27.4.19, photo by Gareth Bromhall   (Click to enlarge)

A rally by far-right For Britain leader Anne Marie Waters, an openly racist islamophobe and political ally of Tommy Robinson, was held in Swansea on 27 April.

A motley crew of 40-50 people gathered for a 'national mobilisation' within a tight police cordon to hear Waters's hate speech, under the guise of a pro-Brexit protest. Some local Leave voters expressed later on social media that they felt tricked into attending a rally for an openly racist organisation.

The far-right elements, although at times vocal, were without their usual insignia and paraphernalia in an attempt to legitimise the rally as purely pro-Brexit.

The rally was countered by a few hundred local people, including activists from Socialist Students and the Socialist Party, trade unionists and local community groups.

A separate "multicultural festival" was organised by Stand Up To Racism (SUTR). It included speeches from local Labour Party politicians - whose spending cuts have had a direct effect on the rise of racism in our city.

But thanks to the intervention of Socialist Party activists, most present ignored the insistence of Socialist Workers' Party members in SUTR to attend the festival and instead took part in a direct counter-protest against the far right.

Our placards and chants of "jobs and homes not racism" were well received. Several young people approached us about getting involved and the majority of those present on the day were convinced about the correctness of our tactics.

It is past time that trade unions stopped franchising out the anti-racism struggle to SUTR's ineffective tactics and programme, and started taking seriously the task of building an anti-racist campaign in the face of a growing far right, emboldened by Brexit confusion.