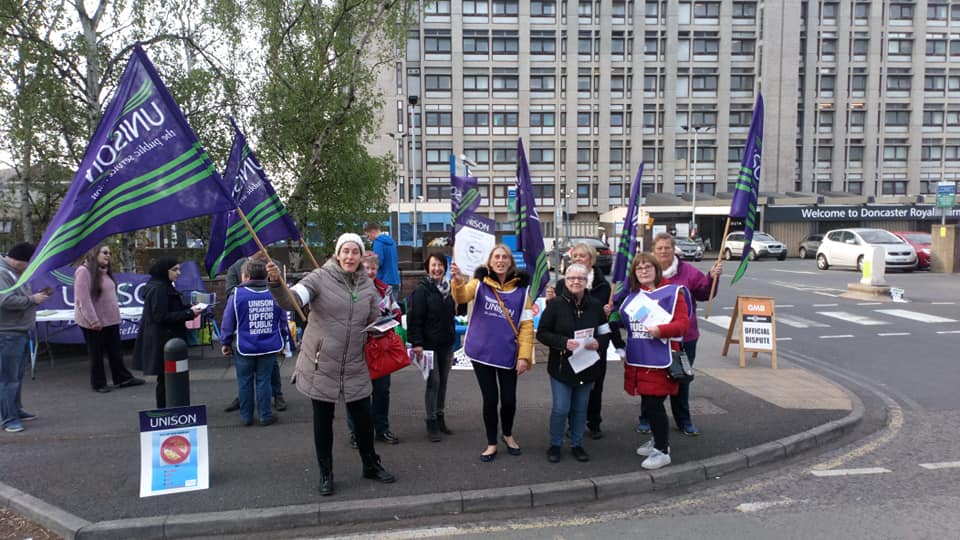 Strikes can get results

We can save the NHS 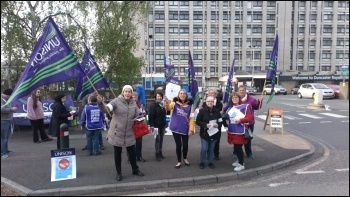 On 3rd May Unison has announced a spectacular victory in the strike over pay for privatised NHS workers (see 2nd May Socialist Party report below).

After two days of industrial action Sodexo has reached agreement with Doncaster and Bassetlaw teaching hospitals NHS foundation trust, to pay the Agenda for Change pay deal in full.

Unison full-time organiser Sue Cookman said: “We need to agree some finer details with Sodexo later on this morning, but I am delighted that an agreement has been reached.”

“No Sausage, Chips and Beans today!”

Hospital catering staff on strike at Doncaster Royal Infirmary (DRI) sang “No Sausage, Chips And Beans (SCABs) today” and “Pay us what you owe”, on their picket lines.

Around 80-90 Unison and GMB union members are striking for three days this week (May 1st – 3rd) and have named another three days of strike dates for each of the next three weeks if necessary.

Kitchen and catering staff at DRI, Bassetlaw and Mexborough hospitals were TUPE transferred from the NHS to multinational Sodexo in January 2018.

But Sodexo has refused to pay the first year of the three year NHS pay award which started last April. The rise would mean £2,000 a year to some of the lowest paid staff in the hospital.

Sodexo can easily afford to pay having made £65 million profit last year and paid out more than £5 million to its directors. As Unison regional officer Tony Pearson told the strikers’ rally on Wednesday: “Sodexo claim to be a global leader in Quality of Life Services, but just NOT in YOUR lives!”

Head chef and new Unison steward Laura explained how the strike came about:

“I was schooled in the miners’ strike, I’ve worked here 23 years and stepped forward when Sodexo refused to pay.

“There was only about 30 in the union then but I started joining colleagues up, saying if we let them get away with our pay rise, next they’ll come for our terms and conditions.

“We got up to 75 members and when we balloted there was a 100% vote for strike action!”

With pickets on all six gates at DRI, fellow workers have been asked to bring “Sarnies in Solidarity” with the striking catering staff.

There’s loads of support from the passing public, who respond to the flags and placards with signatures and car honks.

Despite Sodexo bringing scabs in from elsewhere, the strikers are in high spirits and confident that they will win.

This version of this article was first posted on the Socialist Party website on 2 May 2019 and may vary slightly from the version subsequently printed in The Socialist.