Link to this page: https://www.socialistparty.org.uk/articles/29093 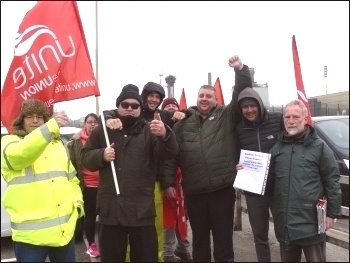 Pickets and supporters at Sellafield, May 2019, photo by Robert Charlesworth   (Click to enlarge)

If anyone thinks that "social partnership" - trade unions and bosses working together for supposedly common interests - delivers decent pay and conditions for workers, let them just go to the Sellafield nuclear plant for a reality check.

Here at this multinational, multi-billion pound nuclear site, one of the biggest in the country and backed by taxpayers' money, they will find security guards, cleaners and canteen workers working for a poverty level of pay.

The canteen workers regularly work weekends without overtime pay. Until they recently joined Unite, they weren't even paid extra for working on bank holidays.

Sellafield Ltd uses outsourcing to Mitie to cut costs - to get away with those workers receiving poverty wages, well beneath the decent wage it pays to directly employed skilled workers.

One told me that because the basic wage doesn't cover his regular direct debits, he works all weekdays and all weekends, except for one weekend free a month "just to put food on the table.

Nobody should work seven days a week in this day and age. In 13 years my wage has just gone up from £6 to £8.21 an hour. The fat cats get fatter, the poor get poorer."

The canteen ladies agree. With an eye on the potential health hazards for everyone on the site, and the time taken up by site access, one says: "Everybody who works here should get at least £30 just for going through those gates."

Another points out: "We could get paid more on the checkouts at Morrisons without all the travel time and hassle ... Mitie took two weeks' pay off us, saying they'd give us it back when we leave, but they won't. We've just taken it for too long."

But now these disrespected and exploited workers are rising up. Around 200 have walked out of the GMB union, which they think is too cosy with the bosses, and joined Unite, which is offering a more fighting leadership.

Instead of accepting an offer of just 24p above the minimum wage like the GMB, they voted by 98% on a 70% turnout to strike for a substantial pay rise, recognition for Unite once again, and to have their voice heard.

Dancing on the long picket lines to keep warm, with open support from contracting workers driving past, you can see how the self-confidence of these men and women is going up.

In the face of the shameless greed and arrogance of their bullying bosses they feel the power of unity, with men and women workers from different services sticking up for each other.

When Mitie tried to divide and intimidate them with techniques used by blacklisters, Unite general secretary Len McCluskey sent a video message of support to the strikers and openly warned Mitie to back off or "the whole power of Unite will come down on you." 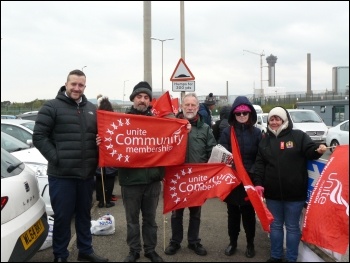 You can visibly see the power of workers' solidarity outside the main gate. All the construction contractor workers driving in stopped to take leaflets from the pickets and they took some time to inform themselves of the workers' arguments.

Despite the police opening both lanes of the road to the gate, the resulting traffic jam stretched back for several miles, delaying the start of work by about three hours. The over-run projects on the site cost half a million pounds an hour.

That's the power of workers at the point of production, construction or service. What an answer to the sceptics who say workers and unions are too weak to fight! The management has warned the contractors that it will dock their pay if they arrive late on the job, but if it does that then everyone could well walk out. So Sellafield is absorbing the cost - using taxpayers' money to help out the bosses of the private contractors.

Last week over 1,000 construction contractors magnificently walked out on strike for two days, without strike pay, in solidarity with their bullied workmates.

Ryan Armstrong, the Unite full-time officer organising the strike, told me how effective the strike was, with only one of the five canteens on this huge complex still open and the dirt piling up.

The 180 Unite members are currently taking 10 days of industrial action, which began on Saturday 4 May and ends on Monday 13 May. This is the second period of strikes following six days of action which ended on Monday 29 April. Unite has announced a further 10 days of action beginning on Sunday 19 May and ending on Wednesday 29 May.

This version of this article was first posted on the Socialist Party website on 10 May 2019 and may vary slightly from the version subsequently printed in The Socialist.