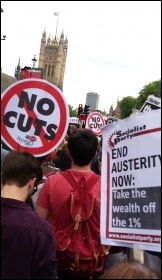 The final United Nations report on austerity Britain pulls no punches in describing the scale and depth of poverty.

It's full of hard-hitting statistics. One in five people live in poverty in the world's fifth-largest economy.

Child poverty levels rising to an expected 40% "would not just be a disgrace, but a social calamity and an economic disaster rolled into one."

The results will be sadly familiar to readers of the Socialist. They describe people choosing between eating and heating, children going to school hungry, and people forced to sell sex or join gangs to escape destitution.

The report charts the rise in food banks and homelessness, and describes how "living in poverty can also take a severe toll on physical and mental health."

Its damning conclusion is that Britain is heading towards conditions imagined by Thomas Hobbes in 1651, with the lives of the least well-off "solitary, poor, nasty, brutish, and short."

Attacks on welfare are creating "a digital and sanitised version of the nineteenth-century workhouse, made infamous by Charles Dickens."

The uncaring response of the Tories is laid bare. "In the face of these problems, the government has remained determinedly in a state of denial." They don't even measure poverty consistently, let alone address it.

The UN represents capitalist governments around the world, dominated by the most powerful countries. It is rare to see them even criticise a government like Britain's, and the report will not result in action from them.

But working-class people cannot tolerate a situation where "great misery has been inflicted unnecessarily."

This report should be a spur to follow up May's resignation with a fight to get all austerity politicians out - Tories, Blairites and the rest.

We must end poverty with socialist policies to take the wealth out of the hands of the super-rich, rather than allow society to be run in the interests of billionaires who profit at our expense.

The UN and Tories will not act for us - the trade union leaders and Jeremy Corbyn must call mass workers' action now.