Link to this page: https://www.socialistparty.org.uk/articles/29185 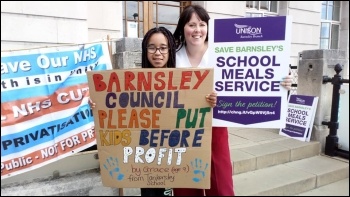 You're Barnsley Labour council. You've already suffered some of the biggest Tory government funding cuts in the country. So you pay private consultants £21,500 for a 142 page report into the future of your council school meals service.

The report recommends that the council keeps and invests in the service. Your senior council officers ignore the report and recommend a "managed exit" from the service because it might not make a profit.

And the Labour council cabinet is due to decide whether to approve the plans on 29 May, then delayed to 24 June.

Step forward Barnsley Unison and the school meals staff and supporters. Nearly 100 lobbied the council cabinet on 29 May, then marched into Barnsley town centre, banging pots and pans.

A blow-up chef, "Sam and Ella catering", warned of the dangers of privatisation. Primary schoolboy Oliver said his mum is a dinner lady and she'd seen 'pack-ups' of just a bread sandwich and a chocolate bar!

So the union campaign is about protecting 220 jobs from being moved into the private sector and about continuing to provide locally sourced nutritious meals to 8,000 children in 49 schools.

While the lobby was protesting outside, Unison organiser Robyn Symonds had a meeting with the council leader inside.

After which, Robyn reported that the council had backed off from going ahead with its proposals and would consult with schools ("shouldn't they have done this first?") before making a decision.

This news was greeted with cheers, giving Unison more time to build the union membership and win even bigger community support for keeping the school meals service and jobs in-house.

If this doesn't stop the council plans, then industrial action will be needed. Last year, dinner ladies and teaching assistants took over 30 days of strike action to save their jobs at Ladywood primary school in Grimethorpe in Barnsley. Their victory will inspire all Barnsley's school meals staff that they can win too.

This version of this article was first posted on the Socialist Party website on 30 May 2019 and may vary slightly from the version subsequently printed in The Socialist.