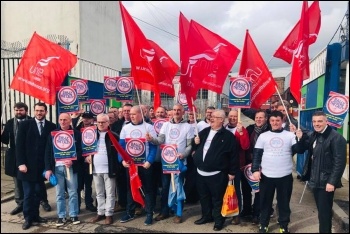 Disgracefully the Scottish National Party (SNP) government and Nicola Sturgeon have refused to step in and nationalise the plant to save the jobs - despite agreeing a refurbishment plan subsiding the private sector for two years.

Gemini Rail took over the Springburn site in August 2018 after a sale was agreed with Knorr-Bremse Rail Services.

But six months later, closure proposals were announced, with the company understood to want to centralise its maintenance services at a base in the south of England. The Unite and RMT trade unions dispute the company's claim that the depot is loss making.

In response Unite and the RMT have launched a 'Rally round the Caley' campaign.

He said: "Our primary concern is to keep this site open. The closure plans are complete industrial vandalism - this is a profitable and productive depot.

"We have suggested a range of options that include one of full nationalisation. We believe the owner of the site would be willing to sell or, alternatively, Network Rail could take on a lease."

The RMT's Scottish organiser Mick Hogg said: "We support any plan which would preserve jobs at this vital national asset."

Public support for the idea of rail nationalisation is huge, particularly with the rising anger at the inefficiency of Abellio Scotrail.

It is urgent that the short time left is used to build a mass fightback against the loss of skilled jobs in one of the poorest areas of Britain, blighted by austerity. Socialist Party Scotland gives full solidarity to the workers and trade unions at St Rollox.

The fight of the Caley workers should be linked with that of the tens of thousands of British steel workers for jobs and the nationalisation of steel. Other manufacturing sectors like the car industry are also in severe crisis.