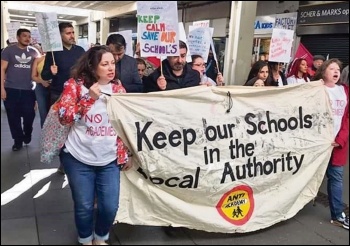 Edmonton Constituency has become the second Enfield Labour Party to pass a resolution opposing all cuts, calling for 'no-cuts' budgets using reserves and for launching a mass campaign.

Enfield North Labour Party passed a resolution supporting a similar strategy some time ago - see report from the Socialist. Two of the three CLPs in Enfield now support this strategy.

The Socialist Party, which clearly welcomes this new move, has long advocated a strategy of setting no-cuts budgets as part of developing a mass campaign against austerity. We pledge to offer maximum support in building this important front in the fight to defend services and working-class communities.

The Edmonton resolution criticises the Enfield Labour administration for implementing yet more Tory cuts to vital services which will impact most severely on vulnerable members of the community. It points out that councillors do not have to accept Tory austerity and calls on them to set a legal no-cuts budget.

Moreover, it details that a campaign "involving the council workforce through their trade unions, the CLP memberships and the wider working class communities from across Enfield can be built through a series of large anti-cuts public meetings, rallies, and demonstrations, thus mobilising a huge groundswell of public support for the Labour councillors."

"An Enfield borough-wide conference should be convened, inviting all interested organisations (trade unions, anti-cuts groups, tenants' associations and community organisations, etc), to come and discuss and then agree on practical measures needed to support the councillors and resist austerity.

"Above all this should be a national campaign. We are all facing the same enemy, the Tory government. Enfield council should therefore reach out to Labour councils throughout London and the rest of the country so that a national conference of Labour councillors who are willing to stand up to the Tories can be convened."