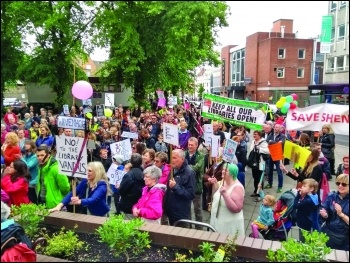 The measure has sparked a wave of anger across the county which has seen protests of hundreds in some of Essex's small towns and villages - many of which have not seen mass protests since the peasants' revolt!

When the people of Galleywood or Manningtree take to the streets in their hundreds, it's a sign that austerity is alienating people even in what were once considered to be Tory heartlands.

Police attempts to restrict local demonstrations - by forcing large crowds to demonstrate on the pavement rather than in the road - have not gone unnoticed by participants.

Demo organiser Andy Abbott (Save our Libraries Essex - SOLE), speaking from the steps of the county library, said that while the campaign was not party political it was anti-austerity. This reflects the fact that people are aware that elsewhere Labour councils have also made cuts.

The demo brought together library users as well as trade unionists from the NEU, Unite, Unison and other unions, as well as many Labour Party members.

Essex County Council's cabinet meets on 23 July to decide the matter. Protesters will gather outside County Hall in Chelmsford from 9am.