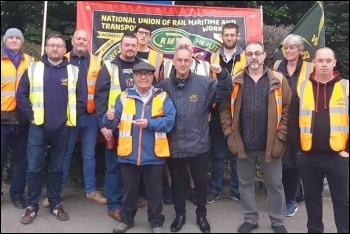 Bus drivers at Bluestar in Southampton were out in force at Totton and Eastleigh bus depots on 18 June, angry at their pay and working conditions.

The drivers, members of the RMT transport union, are employed on 40-hour contracts and are expected to drive for 59 hours with no overtime rates for anti-social hours. Strikers know that the 3% increase offer is not a lot on a wage that's not a lot - just £11.13 an hour - for the work they do looking after the travelling public.

Not that Bluestar cares about its passengers either. Drivers explained to us how many passengers support the strike because buses are so frequently cancelled. This is because Bluestar doesn't employ enough drivers.

In negotiations Bluestar management says there is only a limited budget for pay, but not when it comes to trying to break this strike, with strikebreaking drivers paid £250 a day and put up in hotels overnight.

Strikers were buoyant after the solid support for the strike action, backing from their passengers and lots of support from City Bus and Xela drivers who drove past the protest outside Bluestar offices.

If no agreement is reached then an overtime ban will begin on 1 July which will show management the reality of their understaffed service.