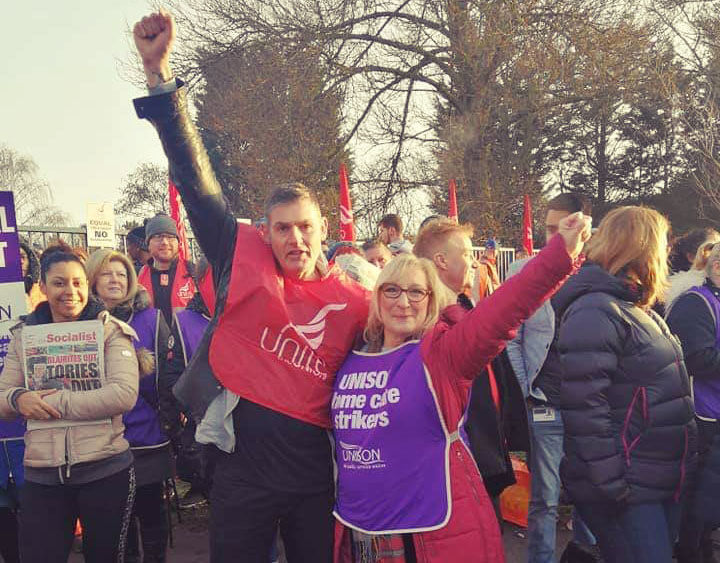 Come to the 2019 NSSN conference

Birmingham’s Labour council has been brought to its knees in the last two years by two groups of its own staff – the home carers and bin workers.

The National Shop Stewards Network (NSSN) 2019 conference on 6 July is a fantastic opportunity to hear more and coordinate the trade union fightback.

The bin workers went on strike in 2017 to defend their jobs, and again in 2019 against “blacklisting” by the council. The home carers took over 80 days’ strike action to defend their hours and pay.

Their disputes, while originating from different issues, were connected. Both were attacks by the Labour council as it carried out the Tories’ austerity agenda. The home carers themselves were inspired to strike by the bin workers’ victory, and by the beginning of 2019 both sets of workers found themselves on strike.

On 22 February the home carers and bin workers held a day of joint action. They have shown the potential of what can be achieved when workers coordinate our disputes.

Their pressure forced the Birmingham City Council to show its cracks. Cabinet councillor Majid Mahmood stepped down from his position. 23 councillors signed a letter criticising the new council leader, Ian Ward – after the last leader, John Clancy, was forced to resign over the 2017 bin strike!

This demonstrates the massive collective power workers have. By taking strike action, not only do workers show who really keeps the city running, but we can act as a political catalyst to rupture pro-capitalist parties.

The Trade Union Congress and union leaders should learn from the heroic determination of the Birmingham workers, and build for a mass mobilisation against austerity and for a general election.

If two sets of workers can bring the second largest city’s council to its knees, imagine what pressure national strikes would put on this extremely weak and divided Tory government. They can’t even agree on a suitable leader, let alone how to meet the demands of millions of angry workers fighting poverty pay and deterioration of their living standards!

The NSSN conference can be a platform to help build a campaign for action. It is through workers’ coordinated struggle that we can get results such as decent pay, hours and conditions.

The Birmingham workers’ victories show us a glimmer of what could be achieved, and should be used as inspiration in the workers’ movement!

Why you should come to NSSN conference 2019

The 2019 National Shop Stewards Network (NSSN) conference on Saturday 6 July is a great opportunity for trade unionists and anti-austerity campaigners to link up the fightback. The Socialist asked Marion Lloyd and Chris Baugh of civil service union PCS for some of their reasons for coming.

The NSSN plays a vital role – not just in supporting disputes, but also coordinating between trade unions and their members at a time when this is required most.

The attacks against workers have been relentless since the Tory-imposed, Blairite-backed austerity agenda. There can’t be anyone who isn’t touched. Either by cuts and closures of vital services in our communities, or the massive job losses including the threats faced by workers in Honda Swindon, Ford Bridgend or British Steel in Scunthorpe.

But the Tories have had a massive wake-up call. Not only is their party in complete disarray because of the outcome of the EU referendum – but their anti-trade union laws, designed to stop struggle, have failed to cow workers.

Strikes are cropping up, particularly in previously unorganised areas such as Uber, Amazon, and others. Workers come together boldly and bravely to fight for what is rightfully theirs.

In my own union, PCS, despite the loss of two national pay strike ballots because of the Tories’ anti-democratic turnout threshold law, members are still determined. The magnificent HM Revenue and Customs strikes in Ealing to keep their office open have won a deferment of closure pending further talks.

There have been inspirational strikes in the Department for Business, Energy and Industrial Strategy, where outsourced workers employed by Aramark and ISS have won concessions on pay. Not enough, however, which is why they are moving to indefinite strike action.

Interserve workers in the Foreign and Commonwealth Office are fighting for the living wage. HM Revenue and Customs workers Liverpool employed by ISS are balloting for action as well.

The strikes in the Wolverhampton and Walsall Universal Credit offices are inspirational too. They expose the poor staffing levels and therefore the poor attitude the government has towards the most vulnerable in capitalist society.

The need for strong, combative trade unions is as vital now as ever. Not just to defeat the Tories, but so that if Jeremy Corbyn comes to power on an anti-austerity programme we can fight to ensure he is able to implement it. The NSSN has a vital role to play in supporting and leading that work. 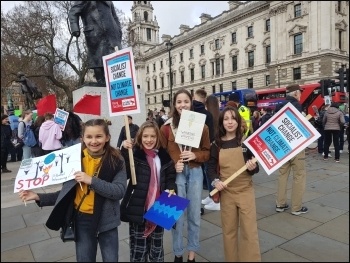 The evidence is now compelling that global warming and extreme weather events are linked to climate change. Since the first earth summit in Rio in 1992, the emissions of greenhouse gases have actually increased.

Capitalist governments have shown themselves incapable of the decisive and effective action needed. Capitalism has shown itself to be the obstacle to the scale and pace of change needed to end our reliance on burning fossil fuels and move to a zero-carbon economy.

The trade unions need to heed the call to action raised by the inspirational global school student climate strikes, and the civil disobedience of the Extinction Rebellion protests we saw in London. PCS has played an important role in campaigning for the climate as a trade union issue.

Unions in Britain need to take this issue seriously, and mobilise their power and influence to win support for a just transition – one that places workers’ interests at its heart, based on public ownership and democratic planning, from the local to the national to the global scale.

The NSSN can play a vital role in bringing trade unions together in the fight for socialist change, not climate change.