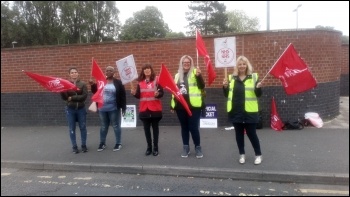 "If this goes through, things will never be the same again. It's the beginning of the end," said one Birmingham and Solihull Mental Health Foundation Trust picket as Unite and Unison members began their three-day strike against privatisation through the back door.

The action, which started on 24 June at several sites, is against the trust forcing 160 maintenance and facilities workers out of the NHS into a wholly-owned subsidiary, Summer Hill Services Ltd. The trust has repeatedly failed to answer questions over the claimed savings being used to justify the transfer. As one Unison member told the Socialist, it looks like their main saving will be from tax dodging. Publicly-owned NHS bodies have to pay VAT but private ones don't, a double robbery by the fat cats from our public services.

Penny-pinching won't stop there though. The transfer would see new staff on worse contracts, probably followed by attacks on current workers, combined with corner cutting and reorganisation that will result in a worse service for patients.

The transfer is set for that start of July. However, regulations have not been followed for ether the required consultation or the Tupe (employment contract transfer) process, which could result in legal action by the unions.