Link to this page: https://www.socialistparty.org.uk/articles/29384 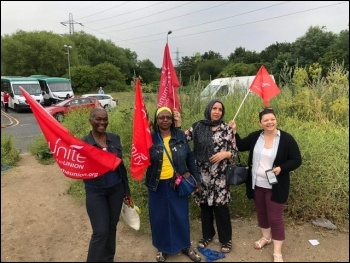 Unite the Union members employed as drivers and passenger assistants by Hackney council have been taking action. July 2019   (Click to enlarge)

Unite the Union members employed as drivers and passenger assistants by Hackney council have been taking action, including strike action, in support of a campaign to compensate workers who undertake split shifts.

The actions on strike days have gradually escalated so that there were demonstrations every day by supporters of the strike which blocked buses being driven by the small number of strike breakers.

On the last day of the current round of strikes, the employers thought that they would be clever - the buses were taken out of the depot the previous evening and parked in a private car park, which they thought was out of sight, apart from the top deck of a double decker bus, which is indeed how this cunning plan was rumbled.

On the morning, campaigners parked cars across the entrance to the car park while the strikers occupied the pavement - meaning that in fact no buses could move.

The action was extremely effective - leading to the Director of Education visiting and attempting to coordinate the very unsuccessful attempt to break the strike.

This is a solid campaign - with new members joining the union and agency staff too have joined the strike.

While individual Labour Party members and the Constituency Labour Party have shown tremendous support, the response from councillors in a majority Labour council has been appalling.

One councillor who visited the depot - not to stand on the picket line but to assist with the strike-breaking exercise - said that the strikers should be happy with their wages (some take home less than £800 a month) but also that there was no "magic money tree" - wonder where he got that quote from?

This strike shows once again how important it is for Jeremy Corbyn and John McDonnell to give clear direction to Labour councillors: no more austerity, implement fair pay for public service workers - but also, crucially that those councillors not prepared to fight austerity should be deselected.

Strikers have made it clear that unless the dispute is resolved, then following the school holidays there will be more, escalated strike action and campaigning.

Urgent appeal for funds for the strike

The employers have made deductions from pay for the strikers without any warning. While union members are getting national strike pay, most are part-time and as a result, their pay packet has been hit.

This version of this article was first posted on the Socialist Party website on 17 July 2019 and may vary slightly from the version subsequently printed in The Socialist.