Link to this page: https://www.socialistparty.org.uk/articles/29393

Editorial of the Socialist issue 1051 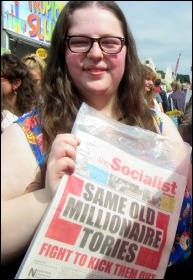 Boris Johnson's victory in this summer's Tory party leadership election will probably turn out to be the most predictable political event of 2019.

Having successfully manoeuvred during the MPs' part of the contest to ensure that his opponent would be a remain supporter from the 2016 EU referendum rather than another Vote Leave campaigner, the Tory ranks were always going to go for Johnson.

And so 92,153 people - less than one-fifth of one percent of the 45.7 million UK electorate - selected the next prime minister.

But Johnson's victory resolves nothing, for the fate of the Tory party or for Brexit. How future events develop will be anything but predictable.

Johnson has pledged that Britain will leave the EU by 31 October 'with or without a deal, do or die'.

Equally likely however, if not more so, is a continued fragmentation of the Tories and a renewed parliamentary paralysis when MPs reassemble from the summer break in early September.

A general election in the autumn is now firmly on the agenda, against the backdrop of global and domestic turbulence - and the possibility, then, of a Corbyn-led government.

If there is not a withdrawal treaty agreed by 31 October the default position is that the treaty obligations between Britain and the remaining EU27 countries will no longer apply at that point, a 'no-deal' Brexit.

To obtain a further extension the UK government needs to request one, and an EU summit agree to it and its terms unanimously.

The EU27 countries have, so far, maintained a unified position that the current 'Brexit-in-name-only' 585-page legal withdrawal treaty agreed with Theresa May last November is not up for renegotiation.

But the more ambiguous, non-binding political declaration could be recast, they say. The EU27 leaders do not wish for a disorderly Brexit or for 'Brussels' to be blamed if the whole process collapses.

A significant number of Tory remainer MPs have threatened to support a parliamentary no-confidence vote against a Johnson premiership if it is clear by September that a no-deal Brexit is being actively pursued.

On the other hand, changes of little substance are unlikely to satisfy the hard Brexiteer European Research Group (ERG) of Tory MPs. Conscious that a majority even of Johnson's new cabinet backed remain in 2016, the ERG deputy chairman Steve Baker refused a ministerial job offer on the grounds it would render him 'powerless'.

All of this points to Johnson going for an early snap election to try for a 'personal mandate' to pre-empt the inevitable collapse of his government.

Speaking at her farewell drinks gathering of Tory MPs Theresa May stressed that their priority should be "stopping Jeremy Corbyn entering Downing Street". The prospect of a Corbyn-led government is almost the only glue holding the Tories together.

The ruling class as a whole, too, looks on a Corbyn-led government with trepidation. Under Tony Blair their attitude was different. With Labour's transmutation into the completely capitalist New Labour in the 1990s, the capitalists were confident that their interests would be served.

But even though Jeremy Corbyn has failed to decisively overturn the ideological and organisational legacy of Blairism and transform Labour into a mass socialist workers' party, for the ruling class he is still not to be trusted.

This is not only in a general sense: because a Corbyn victory would give enormous confidence to the working class, whetting its appetite for a broader struggle including an openess to clearer socialist ideas. It is also specifically: because he is not a reliable defender of capitalist interests on the EU and Brexit.

Corbyn campaigned in the 1975 referendum against the European Economic Community, before it was renamed the EU.

As a backbench MP he consistently voted against all the neoliberal EU treaties. These are the rules and directives which give the bosses' club its character as 'Thatcherism on a continental scale'.

It is true that Corbyn made a significant retreat from this position upon his election as leader in September 2015. In a first and damaging concession to the Blairites he committed to support a remain vote in the then forthcoming EU referendum in all circumstances.

This mistake continues to contribute to a perception amongst many leave-supporting workers that Corbyn opposes Brexit. But despite the pressure since the referendum from the Blairites he has not capitulated so far to their demand to overturn the 2016 result.

Even when he has spoken of the possibility of a second referendum he has ruled out a repeat of that vote.

So, in his first major broadcast interview after Johnson's victory, on Sky News, he supported a referendum against a no-deal Brexit if that is what is proposed.

But he also said that if Labour won an election he would "reopen talks with the EU" about reaching a Brexit deal. This leaves it open that he would campaign in favour of Brexit in any second referendum rather than for the option of remaining in the EU.

It is to avert this possibility that the campaign is being stepped up by the Blairites and the establishment media against Corbyn's leadership. Deputy leader Tom Watson is openly mobilising his base ready to move when the time is right.

Whether the Blairites and their capitalist backers mount a direct leadership challenge to Corbyn like they did in 2016 or form a new party is another unpredictable factor in the equation.

Splitting to form a new party more substantial than the hapless Change UK is a card that cannot be played repeatedly. The calculation may be that staying to sabotage a Corbyn-led government would be a more valuable service to the ruling class.

What is clear though is that combating these agents of capitalism within the workers' movement is the duty of every socialist.

These are volatile times. The European elections were followed by the Peterborough by-election in which Labour held off Nigel Farage's Brexit Party.

This was in a leave-voting city that, significantly, had seen average pay shrink by 13% in real terms since the 2007-08 financial crash. Class issues cannot be so easily buried.

The slow-motion implosion of the Tory party culminating in Boris Johnson's unstable tenure in Number 10 creates new opportunities for the workers' movement.

The task is to meet the unfolding events with a clear socialist programme, which must include an internationalist opposition to the EU bosses' club.

This version of this article was first posted on the Socialist Party website on 30 July 2019 and may vary slightly from the version subsequently printed in The Socialist.