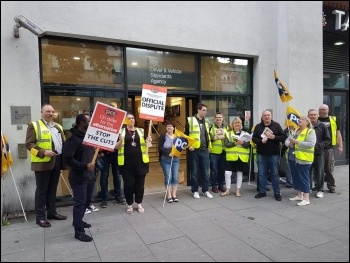 After three years trying to negotiate on a number of issues - the imposition of an additional working hour for driving examiners, travel time and workforce issues including insufficient staff - the union was forced to ballot for targeted action and action short of strike.

The union received an overwhelming Yes vote for both - 82.6% and 92.2%. During this time the chief executive failed to meet with the union once.

The largest number of staff called out are in Nottingham and there is a strong, enthusiastic mood and camaraderie on the picket line, with the majority of strikers attending.

Staffing is the main issue in Nottingham and staff providing IT support and the income generating team that supports people wanting to become approved driving instructors are on strike - the only such team in the UK.

The ADI team also have to answer phones and emails - there were 11,000 phone calls in last year - but this is not classed as part of the job so no time is allowed for it!

Strikers said: "Work is constant all the time" and "there's institutional bullying - staff are looking over their shoulder all the time."

Workers said that approximately 30% have been affected by disciplinaries or grievances.

An example was given of how a new manager on her first day, tried to terminate a member of staff on probation. The union prevented that.

Management have also threatened restricting the access reps have to emails: "So how are we [the reps] supposed to talk to each other about [negotiations on the dispute], health and safety and everything else."

The union welcomes support at the picket line outside The Axis Building, 112 Upper Parliament Street, Nottingham NG1 6LP, Monday-Friday from 7am to 10am.

Coventry: Socialist Students is back - come to our outside meet-ups