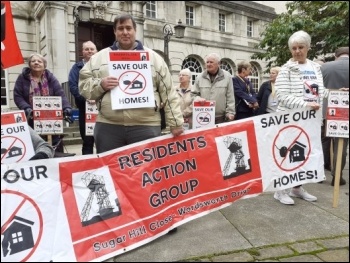 After over two years of campaigning, the residents of Woodsworth Drive and Sugar Hill Close in Leeds have had plans to demolish their homes voted down unanimously by Leeds City Council's planning committee.

The LS26 Save Our Homes campaign fought their landlord, Pemberstone, which sought to replace their homes with 'luxury' housing for sale.

Fifty lobbied the meeting on 3 October. Despite Labour leading the council and planning committee, it took immense pressure for a tenants' representative to be allowed to address the meeting.

But relentless campaigning, including demonstrations, meetings, and extensive local and national media coverage, forced the council to reject demolition.

As leading campaigner Cindy Readman told us: "We're very surprised it was a unanimous decision, as beforehand we didn't have any indication. We started to feel more confident as the meeting went along, but never expected it to be unanimous."

"We do believe Pemberstone will appeal this decision, but we also believe the planning committee were trying to make it as watertight as possible. We hope they take on the recommendation that the houses are refurbished.

"What I would say to other tenants facing this situation is don't give up, the little people can win, we've proved it. Get organised and don't be afraid to ask for help."